GOLDEN PLAYTIME...AND THEN AN ECLIPSE 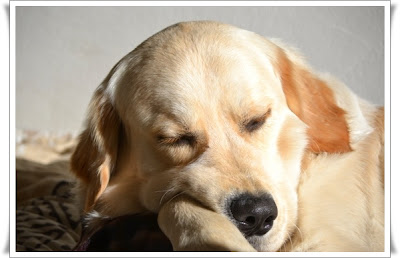 Hello there, dear friends,
There is something so therapeutic about watching two Golden Retrievers at play in the early morning sunshine of our bedroom.
Having hoovered up their breakfast, they settle onto their mattress, in the corner, for some serious one-on-one time.  This entails five minutes of happy snorting and mouthing. Their frenzy of fun is occasionally interrupted with some cheeky barks and chiding snaps. 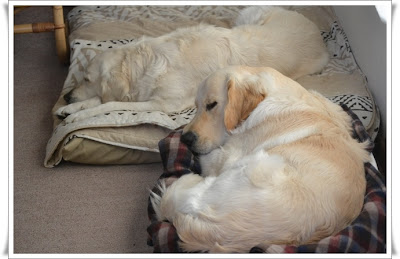 Toby usually puts his paws in the air, in typical 'goof-ball' fashion, as he encourages Tammy to nibble at him.  Her jaw dilligently works up and down his snout, over his whiskers and then settles on his soft ears, for a thorough chew.
In response, his eyes roll back in bliss and his paws push the air.
Soon the roles are reversed: Toby's energy catches up with him and he grabs her around the bottom of her neck - a good chunk of fur and thick skin in his mouth.  Their faces are close together in contented embrace. 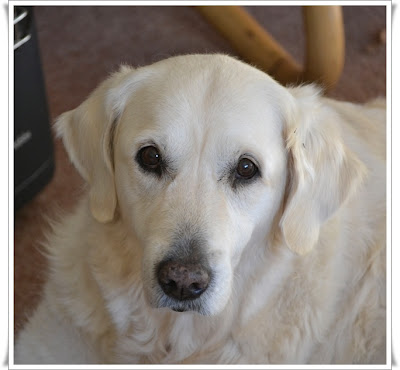 After a short while, they progress into attentive licking and grooming.  Both of them want to be on their backs at the same time - at my feet, while I write.  Their warm fur and weighty bodies settle comfortingly over my toes. 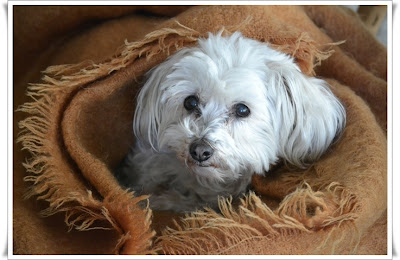 King Toffee looks upon the scene, with distanced disinterest.  The warmth of his own throne is far too enticing to get involved. 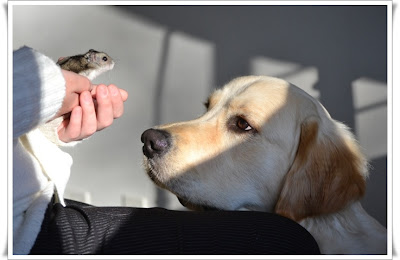 Occasionally other members of our menagerie join us.
Toby is always the first to greet little 'Schnapps'. 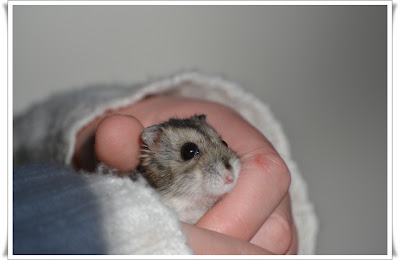 Yes, early morning is a Golden treasure for me.
On Wednesday night, we were treated to a spectacular, lunar eclipse, under clear South African skies. 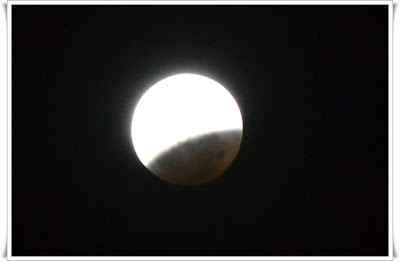 We all gathered outside, shivering in the chill of the winter's evening and gazing up at the heavenly spectacle.
Our universe is pretty awesome, isn't it? 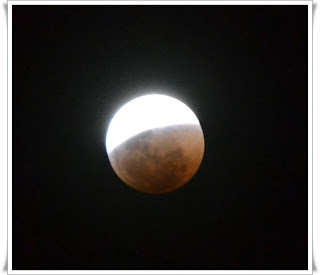 The night air was chilly though, so we quickly retreated inside to the warmth of our lounge.
Toby somehow secured the best position on the couch. 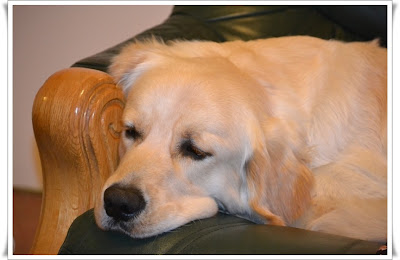 Besides a week-long battle with our home computer, all's well in our world for the moment. 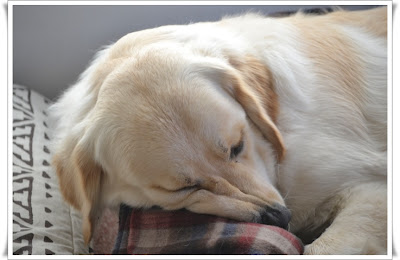 Sending lotsaluv and wishing you all a wonderful weekend!

Delighted that Toffee continues to be Toffee !

Excellent post Maxmom. You are doing a fine job in making Gail feel guilty that I do not have a brother or sister to play with....

And lucky you, seeing the eclipse. We looked, but as usual it was too cloudy.

It's hard to have a bad day with a happy Golden!

Nice to see you again! I always ♥ seeing that little rodent of yours on the blog, just too cute! Still waiting for a photo of Schnapps with a petunia on his head!☺

Agree mornings are delightful! Such a cheery post and wow, the eclipse - awesome! Hope you have a great weekend.

It sounds like a great way to start your morning. What a cool eclipse! We could not see in here
Benny & Lily

What a beautiful post!! Love the little one in your hand...so cute!! Love all of the pictures very much!! Lots of love, Debbie & Mom

Yep, mornings are great. I love to watch doggies sleep. I wish I could relax like they do.

Those two are just so sweet. I love taking a chunk out of River's throat too while he nips onto my face & ears. It's so fun! What beautiful shots of the moon. Very cool indeed!

What a lovely, heartwarming post! Toby and Tammy sound just delightful together, and the love between them is so sweet! And King Toffee is just adorable! As is Schnapps, whom I don't we have met yet! What a cutie!

That is so great that you were able to see the lunar eclipse. It was a spectacularly bright Strawberry Moon. And yes, the Universe is very amazing!

Schnapps is adorable and your lunar eclipse is just gorgeous!

Here there and everywhere!

We did not have an eclipse Maxmom,, so thank you for sharing the splendor of your with us.
In fact, I have been missing the moon lately.. missing it badly.
Sometimes things get in the way,, like clouds,, or sometimes ourselves get in the way.

What a wonderful way to greet the morning, to see such happiness and love between Tammy and Toby.
Doesn't it feel comforting that they have each other and this awsome bond! I can imagine the smiles in your heart as you watch thier play.
King Toffee is so very smart,, to just stay uninterested, and get caught up on his naps,,,, watching the sillyness from the corner of his eye.
What a cutie little schapps is! So very sweet. He almost looked like a little chipmunk!
So good to hear from you
love
tweedles

Loved all the adorable photos and it's so great to hear about the loving, sweet relationship Tammy and Toby have formed...Awesome eclipse pictures as well=you guys had a great view of it!...Happy weekend, precious friend; hugs, Caryl and kisses to your lovely babies...J, Calle, Halle, Sukki

Nothing like a good game of bitey face in the morning.

I just love that last picture of Toby with his face all squished up...too cute.

Its Fathers Day where we live but we use this day to celebrate all kind, loving men of all species. All of our love to all of you.

That's a great new header photo of Toby - he looks so grown up!

We hope you all had a good weekend,
Love
Riley and his mum

We're happy to hear all is well in yoor hoswe! Smoochies.

You guys are so pretty. And that eclipse? Breath-taking!!