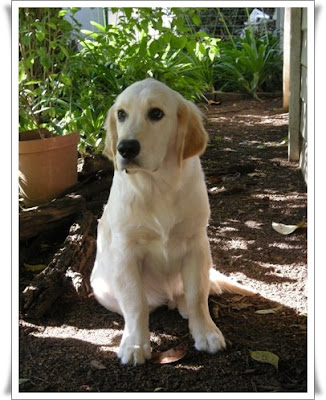 Hello there to all my furry-buddies...
We've had a really fun afternoon and I'm dying to tell you about it... 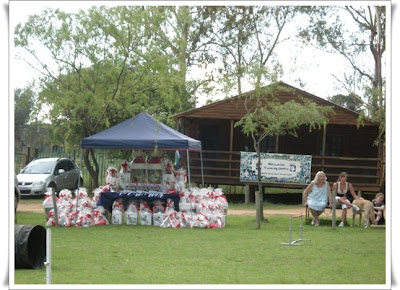 It was the end-year-'concert' for my dog school :
MCKAYNINE TRAINING CENTRE﻿
(Check out those prizes!!! BOL!)
I am still a pup, so I wasn't actively involved in the displays, but "Maxmom" still wanted to go and take a look and she said I could go along and take a look too. 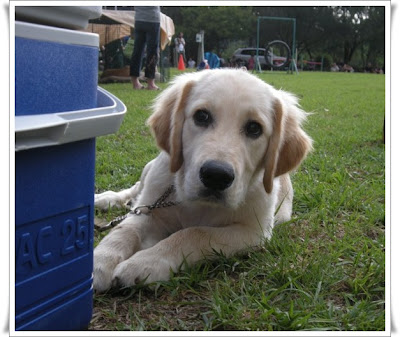 She piled our family into the car, with me and the cooler box in the boot of the car. Thankfully she took my water bowl and my treats along too.  It was a very hot afternoon. 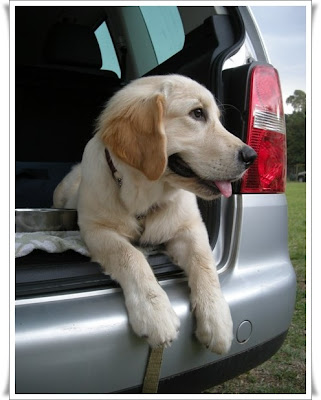 She gave me a good talking to about "how I must behave", but I find it very difficult not to bark on these occasions. It's just soooo exciting!!! "Maxmom" says my energy and excitement is rather out of control at times, but thankfully I did respond to her treats and didn't bowl over too many doggie-buddies. But I spent a good part of the afternoon watching the proceedings from the boot of our car. BOL!
The participants and audience were all sooooo well-behaved! They are such good role models for me!  Take a look at some of them: 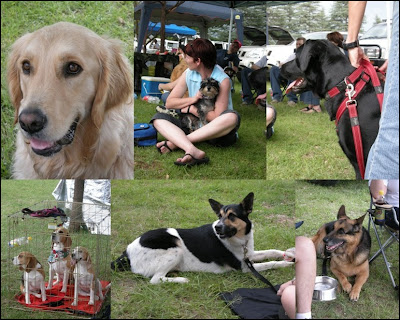 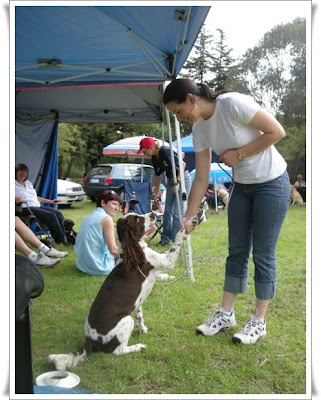 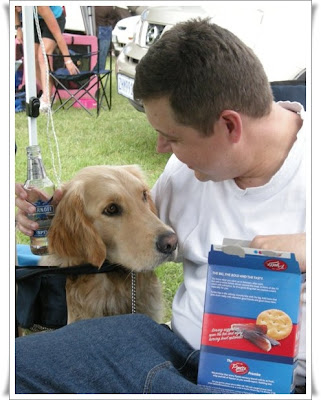 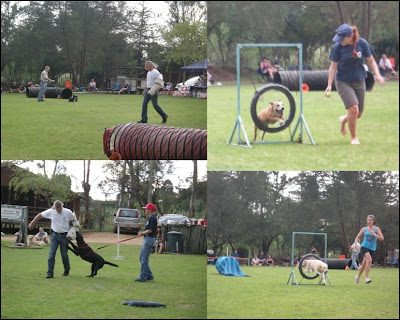 Unfortunately we were too late to watch the obedience though.  It all looked so impressive!  As you all know, I've recently completed my puppy socialisation at McKaynine School already.
Please go and take a look at all the photos (... of all of us puppy graduates):
HERE
... "Maxmom" has now signed me up to start my formal obedience lessons in January next year.
It's soooo long to wait!!!
(I'm forcing Maxmom to train me a bit at home in the meantime, so that I don't forget everything I have learned already. BOL!)﻿
Anyway after the demonstration of all that fantastic canine skill, there was a competition for dogs who were "dressed up". 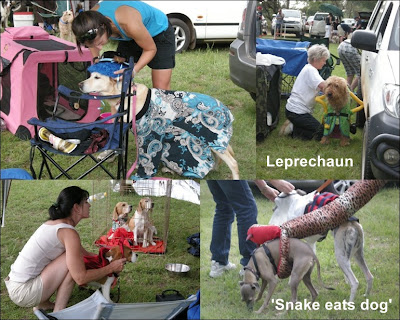 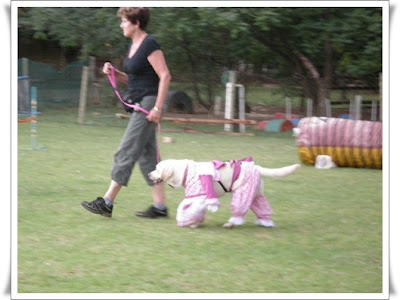 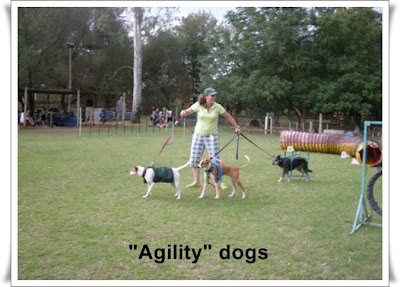 Again I wasn't included (thanks to my negligent Maxmom) but at least I got to watch.  There were some really funny outfits:
Maybe 'Murray' will be interested in the 'leprechaun' doggie...he was quite awesome!: 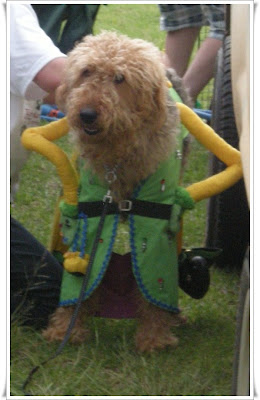 There was also so much cool stuff around...like this car... 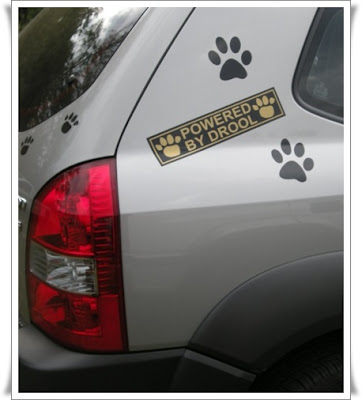 We got to rub noses with some of our doggie friends again - including another
"RUFFITWOOD" Golden Retriever. 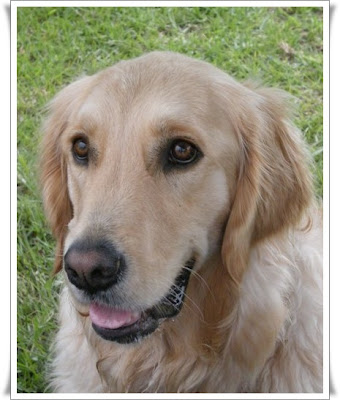 Maxmom says that this is one of my 'family'!!!....mmm...there looks like a 'sprinkling' of our Angel Maxdog in this sweet golden too!
As is common with our weather here in Johannesburg, South Africa at the moment, the storm clouds gathered and the rain came tumbling down before the prize giving.   I know lots of doggies stayed, but I had to get home to my 'Aunt Tam', so we left early. 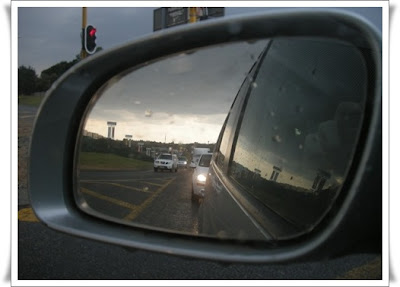 Congratulations to
McKaynine Training Centre
... on a wonderfully organised event!!!
I can't wait to go back again next year!
I also want to wish all my doggie-buddies from the school a wonderful Christmas time.
I hope you all get LOTSATREATS from Santa Paws!!! 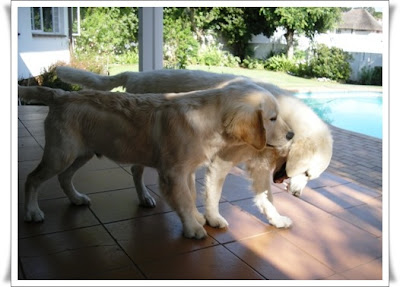 Well Toby, I am all about energy and excitement and I really don't see that you can have to much of it and I certainly do not think that it is a valid reason for shutting you in the car and away from all the fun. I shall have to have a quiet word with MaxMom about this!

Oh, and do tell me, that terrifying 'snake eats dog' costume. It wasn't supposed to be funny was it??

What a cool event! Toby - talk about growing! Each and every week you are getting bigger and bigger. And ohhhh... how you resemble Max - how special! I think you were a very good pup to stay in the car while Mom looked at all the neat doggeh fun going on - and what a LOT of wonderful pressies for the pawticipants! Thanks for visiting - we haven't been such good blog buddies ourselves... it is a bizzy time of year! Give A. Tammy a hug and Toffee too!
Hugs xoxoxo
Sammie and Avalon

HI Toby what a good boy you are!!! You make youre mama proud Im sure!!!! Hugs Joey and Kealani

What a fun event! I am so jealous. I could totally use a weekend off! Hehe :-)

Yikes we think that was angel Max. What a big boy Toby going along to the event. Did you behave or did you scream at people?
Benny & Lily

Toby, we are so proud of you! You just get bigger everytime we see you! Very charming! Lots of love, Holly and mom

What a GReat day!

Thanks fur sharing those pawesome pikhs!

I'm sure The Mango Mobile would love one of those stikhkers!

Hugz&Khysses,
Khyra
PeeEssWoo: Thanks fur the khard and wishes! It arrived on Saturday!

Toby - You were clearly star of the show !

What a terrific event. Next year, you will be one of those example dogs!

We loved the photo of the dog dressed as a leprechaun - he looked very like a doodle!

Thank you for letting us know about him.

Toby, it looks like that was a real fun day. We can't wait to hear all abowt yoor training in January.

Hi Toby
What a great bunch of good looking graduates you had in school! And the festivities looked like a lot of fun for you & the rest of the doggies.

oh Toby, your cuteness makes me want to get another puppy.....
xoxo

Looks like lots of fun Toby! I want that "powered by drool" magnet so everyone knows which car is mine!

Toby, I think you would love agility! you're just that kind of guy!
It's so nice to think of someone having warm weather. Today the high temp was 24 and tonight it will be below 0!!!

What a fun day, thanks for sharing it with us.