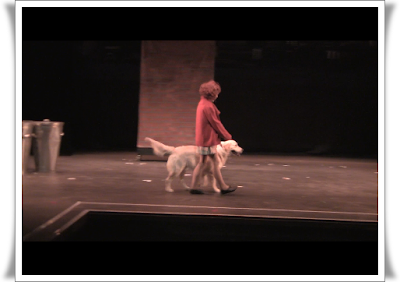 Hello there to all our friends around the world!
Firstly, I would like to express my sincere gratitude for all the messages of support and encouragement which arrive in our in-box and on facebook every day. Your wishes have been really welcome during this busy time. I am acutely aware that my blogging activities are one-sided at the moment.  Please accept my apologies. I am simply posting up our news - as time allows.
As many of you know (but for the sake of new readers), we are in the midst of the production week for Toby's stage debute, in the musical
ANNIE
Five performances are currently being staged at the UJ Theatre in Johannesburg. If you have missed my blogposts in the past week, please scroll down to previous posts to see some stunning pictures and read their stories.
It's a really special time for me - months of hard work finally paying off - and I am so wanting my friends in cyberspace to share this experience with me.
Please bear with me.  I will try to catch up on your blogs when this is all over. 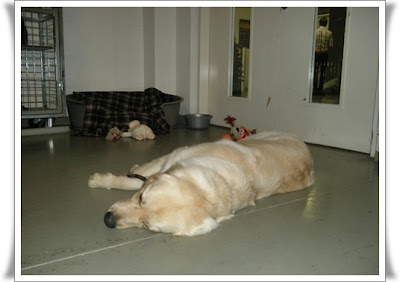 (Above: Toby in his dressing room back stage, between scenes)
Toby appears in four scenes in this production.
The first scene is the most difficult of them all.  In this scene - the "Tomorrow" scene, Toby is on stage for approximately 4 minutes.
As with all live performances, every night is different. For a dog, this means that things are constantly changing and he is having to adapt and rely heavily on his security factors - namely Shannon and me in the wings. Actors vary their positions each time they go on stage, using different hand gestures too.  Moods/Ambience is changing constantly.  The audience's responses vary and their participation and contribution to a dog's paradigm may create immense stress for  the dog.
Toby, however, absolutely LOVES the stage!
Maybe he loves it too much?
At this point - past the half-way mark for production week - he has realised that his trainers will never be accompanying him onstage. In his mind, this is starting to indicate 'freedom', so now he relies heavily on the actor's ownership of him and the muted efforts from his handlers in the wings.
Basically, he is...
on his own!
I would imagine that many dogs would react differently to this knowledge.
Toby, however, is thriving in the limelight.  He is so comfortable and happy on stage.  He has taken to breaking his down-stays, but only at the places that he doesn't have Annie's focussed attention. He's obviously decided to exercise his own flair in his ad-libbed walkabouts.
Thankfully, it looks innocent and part of the scene...usually!
Last night too, he became accutely aware of his food bowl which is being handled by the stage hands in the wings.  His food bowl is enticingly adorned with peanut butter - to be used during the scene which follows the 'tomorrow' scene. i.e. The next scene.
"Do I check out where my bowl is, or don't I?", he might ask.
Well, to a dog, the answer lies in the reward which is offered for his choice.
After a few inappropriate barks, he finally decided to leave the stage in my direction and not his food bowl's.
From an audience perspective, the scene went well.  From a training perspective, we would have scored it at 50%.
His second scene - his 'FOOD' scene - obviously went marvellously...90%
(Well done, Toby!)
His third scene - the 'Send-away' - by himself, on stage?....95%
(Well done, Toby!)
The fourth and final scene - in the hectic finale was his absolute best and had me laughing in relief...
Well over 100%!
(Excellent work, Toby!)
Toby produced the most stunning stage bow imaginable!
With Annie in command, he trotted down the isle of singing and dancing cast members.  His tail was wagging, his head held high and then, after a brief pause, he rose up slightly on his hind legs and took a
'LEAPING BOW!"
onto the floor.
It was highly amusing - to say the least - and, most certainly, eliminated our temptations to strangle him after the first scene, earlier in the performance.
(Only kidding!)
Only two performances remain - tonight and Saturday evening's Gala performance.
What an amazing experience this has been!
I've put together a short video of Toby in one of the rehearsals for the 'Tomorrow' scene...
Enjoy!
If, for some reason, you cannot view this video, please click:
HERE
Sending lotsaluv from me and lotsalicks from Toby,

Wow, Toby, you are just stunning in that video. I am so impressed! (And so is Gail). Calm, handsome, charismatic, sprinkled all over with stardust. Oh I could get quite carried away. I mean, I never expected to have an international mega star for a friend. (You will still remember your old friends, won't you, when you've recovered from your exciting week. I know you will. And Gail says do remember to be wary of those folk who want to be your friends only 'cos you're famous now!)
Toodle pip!
Bertie.

I actually teared up watching this! That is just fantastic!! You have such a special dog here - what a treasure! Well done and enjoy the last few performances!

Abigail the Yorkie and clan xx

TOBY! You were totally amazing! What a fantastic actor you are. I hope we get more videos.

OMD that was absolutely great to watch! You were FABULOUS on stage, Toby! You did your commands very nicely. And you & Annie looked like an inseparable team! Good job, keep it up! We hope to see more videos of you on stage too.

Kisses,
Emma Rose and the Duchess

Awesome job, Toby. We are so very proud of you.

BRAVO Toby!!!!! We are so proud of you and Toby. I would have loved to see his prancy bow at the end. Ad lib is a very important part of making a scene real!!!
Blessings to you both from the holler..

Toby, you are doing us proud sweet boy!

We can only imagine how you must be on pins and needles watching from offstage.
What wonderful memories you and Toby are making and we are sure friendships that will last a lifetime.

I was holding my breath as I watched the scene. I can only imagine how you were feeling!

What a great star, our boy Toby!!

OMD the video was just Pawsome!!!!

Thanks so much MaxMom for think of all of us and posting it!

We LOVED it and know that Toby will be a STAR!

My mum's eyes are leaking seeing Toby on stage, and the way he looked up at Annie at the end. Maxdog has definitely sent you a star!

You are fabulous! We are so proud of you! You are a star, no doubt about it! And Annie's voice is awesome! The two of you look amazing together. I am so furry happy your mom posted the video.

Have fun on your last two performances. Thinking of you and wishing you continued success!

BRILLIANT! You were just awesome, Toby! Way to go!

WOWZERS Toby!! You are a superstar!!! Just outstanding!! You and Annie were marvelous!!

Oh wow, I never thought about the moods and ambience and stuff changing from night to night. Toby is a professional now and he knows how to handle it!

Thanks for the video, I really enjoyed it.

Toby darling! What an amazing doggie! And a baby! You're just a baby! What ever you do in your career on stage, be sure you have FUN! God bless you and your wonderful mum.

I've watched this so many times and each time, for me, is better and better. Stand up and take a bow, Caryl. You and your young dog - that sweet puppy, did great!