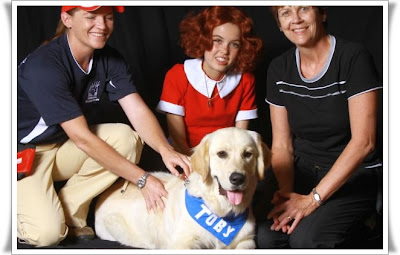 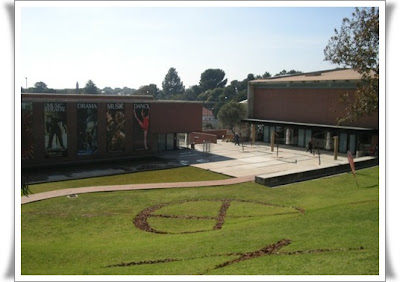 (Outside the University of Johannesburg Theatre)
If I were to look back over the past four months of Toby's training for this production of 'ANNIE', I can truthfully say that there is nothing more that I could have done to prepare him.

At this stage he is exactly where we need him to be (in terms of his training), for tomorrow morning. What follows, during this week, is still not guaranteed. There are still at least four variables remaining:

*  How will Toby be feeling on the day of each production?

*  How will Toby react to the lights?

*  How is he going to react to the orchestra pit and the band?  The sound?

and most importantly...
How is Toby going to react to the audience? 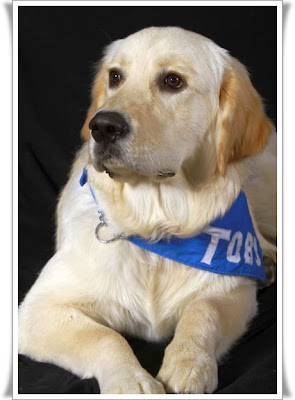 Either way, I have done everything possible to maximise Toby's chances of getting things right when his little moments arrive.  But we have had enormous fun in this process - despite the time constraints in teaching a young dog, and the inevitable pressure at times. 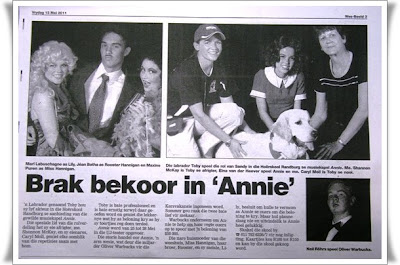 (News clipping: Die Beeld newspaper - Afrikaans narrative.  For my readers who don't understand Afrikaans, the newsclipping - further below, in English, basically says the same as this article...besides the 'brak' part, LOL!  'Brak' is a slang word for an alley dog  - but then again, I suppose this is what 'Sandy' is)
Yesterday was our final rehearsal at the high school:
It was a long day for the cast - starting early morning and finishing mid-afternoon. The tension in the cast is mounting as we approach this week.  The acting is being tweaked, the timing of the scenes is being refined, the dancing perfected, the props are being organised (and added), and last minute changes are being implemented.
The tension is palpable.
As organised, Toby, Lorraine (my dear friend and willing helper) arrived slightly later than the cast.  The scene that met us was one of hyped tension - an extremely distracting environment for a dog: a teacher fell off his chair (much to the delight of the young cast members), children were snacking from interesting lunch boxes on the sidelines, voices were raised amongst those directing the rehearsal and heavy props were being shuffled around noisily.  Unexpectedly too, Toby had to go straight into his scene, without much time to settle in.  I knew it was going to be difficult.
Toby's first scene started. Annie called him onto stage and put him in his position.  Whilst in his 'down-stay' command, some stage hands decided to fill Toby's specific food bowl, rather noisily, in preparation for the following scene (where Toby is 'fed' on stage).  The main problem - their activities were being conducted in the corner, in front of him - in his direct line of his sight!  Toby took one look at them and decided that his food bowl was a far better option.  He broke his down stay and scooted off stage in anticipated delight.
There were a number of similar distractions during the course of the next hour - more foodbowl efforts, paper packets being crumpled, etc, etc. We ploughed through the scene and I finally took Toby, for a very welcome reprieve, into the garden.
At 11.30, the whole rehearsal started again, from the start.  This time, everybody was primed and the various scenes went off without a flaw. 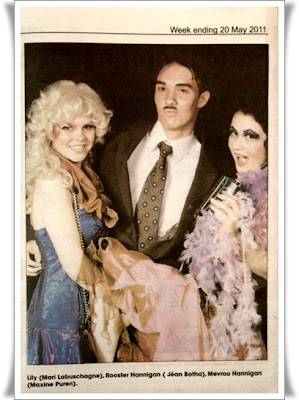 (Newsclipping: Randburg Sun)
Sometimes we all have to be reminded that working with a dog, in this kind of setting, requires sensitive work, respect and consideration for the animal. (Yes, I voiced my concerns, rather loudly.  Afterall, this is my dog we are talking about. ) With understanding finally in place and a consequent happy and enthusiastic pooch, we commenced the rehearsal.
I can happily say that the rest of the day - another four hours - went off without a hitch and we all left happy, enlightened and prepared for this next hectic week. 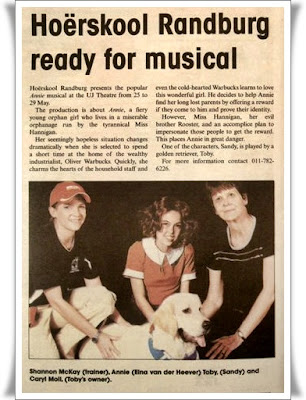 (Newsclipping: Randburg Sun)
As with all live performances, there are always last minute, unexpected happenings and changes.
My approach:
Take a deep breath! Consentrate on Toby! Ease through the unexpected! Stay calm! and most importantly...
ENJOY EVERY MOMENT!
This is, afterall, an incredible privilege to be part of this production. 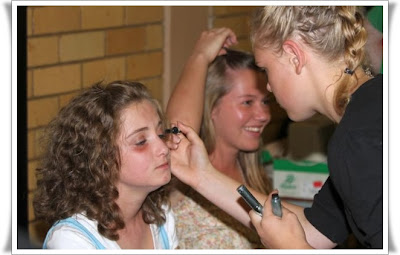 (Orphans getting their make-up.  Photograph: Rian Geldenhuys)
Here are some more pictures... 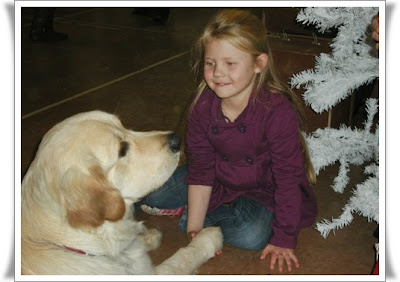 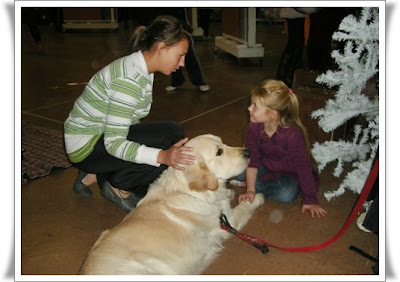 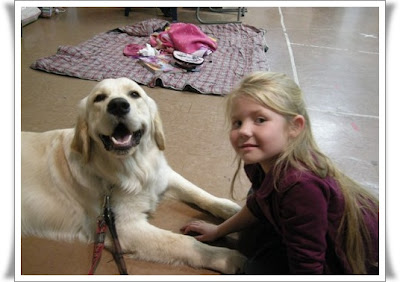 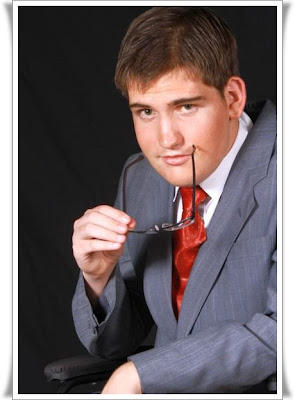 ("Pres. Rooseveld" in full dress)
It's highly likely that this is going too be an intensely emotional week for me:
Besides the Annie production, Tuesday will be the one-year anniversary of the death of my dear 'Maxdog'.  Over the past 10mths of Toby's life, he has filled all those sore places that Max's passing left behind.  Not only that, but he has grown into a beautiful and incredible dog of his own.
What better way to celebrated this in conjunction with my birthday?
Sending lotsaluv to you, our friends, across the world.

You will be fine. Toby will be fine. Whatever happens or doesn't happen is totally out of your control, Caryl. Because you have no control over the events, you do not have to take responsibility for the events, especially if they run amok. Have fun!

My ♥ is right there with you - each and every moment, always.

Sending lots of love. What a beautiful tribute you have given Max by living life to the Max. Anniversaies do bring up lots of emotion and just sending lots of love to whatever comes up for you. Toby, good luck with your performance. Wow. I wish we could come. We'll be thinking of you.

All our very best to you and Toby for a successful perfomance. A great way to honor Max too.

We can feel the tension and excitement in Scotland...

Oh Yes, we can feel the excitement here in the US to!

As they say in the theatre world, Toby, BREAK A LEG!!!

Just popping in quickly to say hope all goes well. I know it will though.. Good look Toby and enjoy.. Hugs GJ xx

My mom and me knows dat Toby will be da bestest Sandy ever! Paws is crossed fur him and you!

You and Toby have reached for the stars, and given all that you can.
Now its time to let it all come together... its time to let the pieces of the puzzle fit together,, and no matter how it comes together,, it will be perfect.
We are with you.
love
tweedles

Wow, what a time you have been having. I have a feeling Toby will be an instant star the minute he walks on the stage. I am anxious to hear how the show goes. We attended that play not to long ago in Montana and it is a delightful play indeed.
Best of luck and Have Fun!!!
Hugs, Gail, Mistaya and Maggie

Sure wish I was there to see the first performance. I am sure as a golden can be that you will do a wonderful job Toby.

Be cool, be calm and Have Fun.

Your a star now.

Excitement abounds! We know Toby will be amazing! You and Toby are having an incredible experience, and have created memories that will last a lifetime, so you both have already achieved great success! I love the photo of Toby smiling at the camera with Marissa. Beautiful!

You will be in our hearts and thoughts on Tuesday, and I hope the day is not too difficult for you. You are blessed that Toby has filled some many voids left by your beautiful Maxdog.

We are very excited for you & Toby. Our paws & fingers are crossed that everything will go very smoothly & that Toby will do his scenes flawlessly. We're not worried about him messing up though because we know he will do them well & he will make you & everybody else proud. GOOD LUCK this week!!!

We know that you'll do just fine, Toby! You will be brilliant and everyone will love you!

Oh what an emotional week for your family. The highs and lows of owning and loving animals. We wouldn't have it any other way would we? Have a wonderful production. Just go with the flow, and as I always say, No worries, love Carol x

Toby will be fine - what an emotional week for you too.

Our VERY best to you guys - Toby is a star and so are you!! I so much wanted to come to the show but my hubby is still in Portugal...:(

Abigail the Yorkie and mom xx

Toby is a star already, as far as we're concerned. We hope you and he really enjoy this week ~ remember it's fun, and don't worry.

Can it be a year already since beloved Maxdog left us all? We mourn his loss too ~ such a beutiful and special dog. We think he will be so proud of how Toby is helping you heal. We are sure his greatest joy will be knowing you are OK, until he can be with you again. Much love.

We wish everyone the best for performance!! We'd love to be there to see all of you!! Lots of love, Holly & Mom

Break a leg, Toby! You're the true star of the show.

Has it really been one full year since Max passed on? I still think of him from time to time. I never knew him but I miss him.

We're back in time for the show reports. I'm just so proud of you and Toby. I like your goals. Be calm and enjoy each moment!! We are thankful that God has placed such a love in your life to help with the loss of dear Max.
We're rooting for you here in the holler...
By the way, stunning photos of Toby!

Isn't amazing how a dog like Toby can fill your heart with joy despite a devastating loss? I've experienced the same thing. There's nothing like the love of a dog.

Can't wait to hear how it's all going down at the theatre!
Toodle pip!
Bertie.