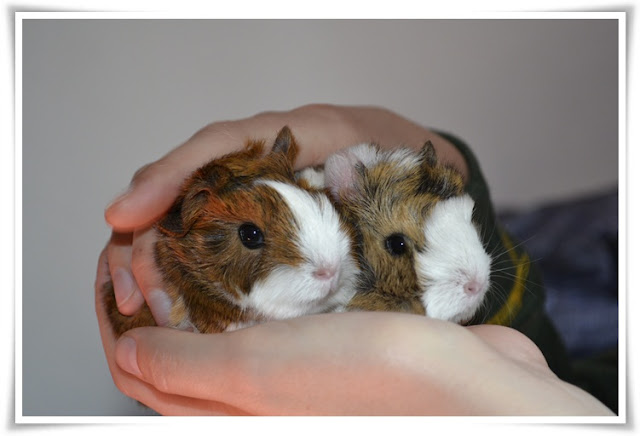 “Mr T”, as he is known, finally landed with his bum in the butter.  He now lives on a plot, in a hand-crafted palace with two new female companions.  And, he has wheedled his way into the heart of an old man who now refuses to part with him.  I am most amused, because I understand how ‘Grandpa’ feels.  But I am also so grateful for how the life of this small Guinea-pig has finally turned out.

This sweet little Guinea Pig, who spent the first 6 weeks of his life with us, was destined for the home of two young children.  By chance or design, we relocated him to the children's care. (Or at least this was the idea) It all happened during their school holiday – a time when they visited their Granny and Granpa.  Of course, “Mr Tot” could not be left behind.  He and his cage were duly loaded up into the car and ferried off to the farm for the family gathering.

The first 24 hours were somewhat awkward.  Granpa’s face was a study of delight as he watched in amazement. “Mr T” was constantly handed from person to person, where he was affectionately examined and cuddled in loving arms.  When he finally landed in the eager Granpa’s arms, his journey came to an abrupt halt.

You see, in all his years of raising exotic animals, Granpa’s had never had the opportunity of scrutinising such a little critter. In his mind, Guineapigs were designed to live outside and observed from a distance.  Although this little creature resembled those blobs that scurried around in the back yard, and who dug holes in which they disappeared, this little thing in his hands was totally the opposite.  This one was tame and affectionate, not to mention extremely pretty. Granpa and Mr T eyeballed each other and a deep, instant bond was magically sealed.

Grandpa hid the little creature in his pocket and fondled him constantly during the weekend.  “Mr T" had the softness of a cotton-wool ball which encouraged the old man’s fingers to explore.  Occasionally Granpa would sleuthfully cut a slice of cucumber and stash it in his pocket.  During all this time, the little Guinea-pig sat quietly and absorbed the fondling; breaking his trance every now and again by reaching for, and shaving off, a sliver of the cucumber.  He giggled and munched with ultimate contentedness.

Who could have imagined that a creature as small as "Mr T" could affect a person’s life so much?
In the weeks that followed, Granpa polished up his carpentry skills and produced a Guinea-pig mansion worthy of a prize. This extra-ordinary little Guineapig had given him a new lease on life.  Careful negotiations with his grandchildren led to each child being gifted with a brand new guinea-pig of his own.  Grandpa’s experienced manipulation skills had effectively secured permanent “Companions for Mr T”.

Yes, 'Mr T' now belongs to Granpa and his smile is the widest ever!

Some stories do have happy endings.  :)

We need photos! What an adorable story!

We love a HAPPY ENDING TOO!!

Is the happiest little story of all?
Oh I just know Mr. T is the happiest little piggies in the world! And Grandpa is too!
I think Mr. T wiggled into Grandpa's hear just like Maxdog did into yours.
Now a mansion has been built? Oh gosh, I can just see the little eyes peeking out of Granpa's pocket into Granpa's eyes!
I love this story. Thank you for telling it to us.
Now I want another story!!
love
tweedles

Hi there, This is just such a cute story and happy ending. When I taught preschool, before I got married, someone brought in a guinea pig and I took it home. It was such a wonderful pet! Here in the US, many folks have them inside, although I know they live outside in other places.
Sending big hugs to all of you today.
Noreen

Maxmom what a fabulous beginning for Mr T. We love the fact that Grandpa now has a soft, furry little friend to love. Thanks for sharing. No worries, and love, Carol (and Stella and Rory)

Aw, What a lovely story. But who wouldn't fall for the beautiful Mr T.
Hope he enjoys a long and healthy life with Granpa.
Cheers!
Gail.

My Uncle recently told me a story about my Grandfather finding their pet Flying Squirrel in his pocket after he got to work one day. Those little pets can be so cute. I will check out the link for your Max book. Tweedles gave such a nice review of it.

Landed with his bum in the butter! I've never heard that saying but I really like it and intend to try to work it into my conversation with JP tonight... :)
What a great story and good for Grandpa and Mr. T.

What a wonderful story! So heartwarming that it made me smile.