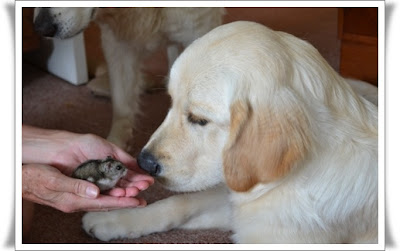 Hello there to all our fur-buddies around the world.
I thought I'd show you a few pictures of Toby's interaction with
"Schnapps"
(Miss "R"s hamster) 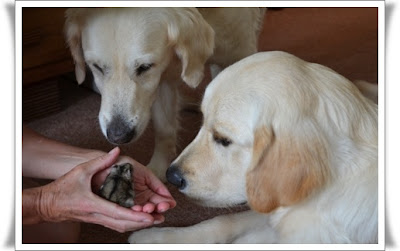 The poor little creature was rather nervous with all the big black noses around, but the poochies were on their best behaviour and exibited all the Golden gentleness they could muster. 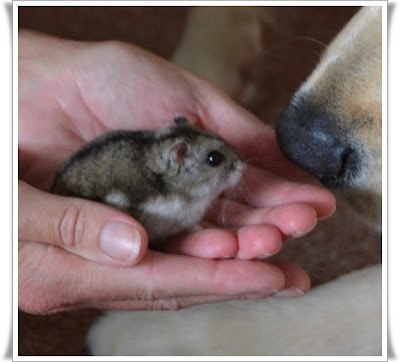 And now for a picture (taken by my friend "Margie") of Toby and myself, from this past Sunday's Open Breed show. Since I was doing the 'showing', photographs were limited.
Thank you Margie.
Without you, I would not have had such a picture! 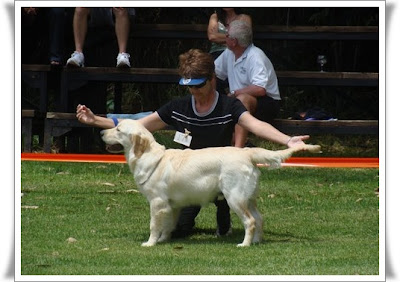 TOBY'S TRAINING PROGRESS:
Toby's training is progressing nicely. In the next couple of weeks I'll be concentrating on reinforcing his basic obedience commands but, most importantly, exposing him to as many 'new' situations and environments as possible.  I am also trying to teach him the "AWAY" command at the moment.
The increased number of short obedience sessions which I am spending with him has fuelled his general alertness.  I am sure that he is fully aware that something is up and that there are new things to learn.  He willingly stays by my side constantly and when I pick up the car keys, he's ready for action. 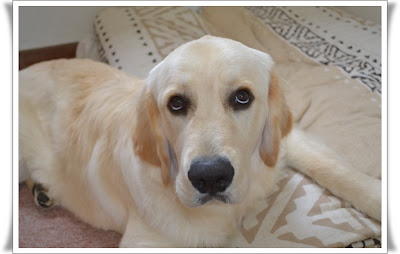 This morning we had a real breakthrough with the
"AWAY!" command.
For the first time during one of our mini-practice sessions, Toby recognised the link between his reward and the little blue mat on which we have been practicing this command.  My heart lept for joy as he bounded to the mat on my command and sat on it without too much prompting.  This might sound a small feat, but it is pivotal to getting him to eventualy go onto stage on his own in one scene.
I have spent 4 days practicing this command with him and he's already getting it.  I am thrilled.
I hope that by the practice session this afternoon he hasn't forgotten it....we'll see.
I took Toby on another short school visit this morning.  The ambience around the school was one of applied studiousness.
The children were in their classrooms having their lessons when we arrived, so it was much quieter than yesterday's swimming gala.  We strolled around the school, up the steps, down the steps, practicing his 'sits', 'downs' and 'stays'.  Occasionally we stopped to greet teachers and explain why we were there. Music was billowing from the music room at the time and there were lots of unfamiliar noises for Toby.
This is his second visit (after yesterday) and he has been very comfortable so far.  He's curious yes, but he's well behaved and very gentle with the children.  Tomorrow we'll be at the school again where we will attend a 'Music Class' with the music teacher and her students.  It should be interesting to see his reaction to all the instruments as well as the sealed off music room. 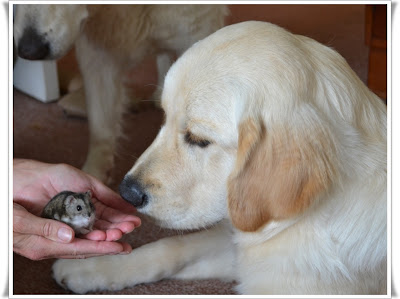 This evening we go back to McKaynine Training Centre for his weekly obedience class.
The countdown clock says:
118 Days to "ANNIE"!
Sending lotsaluv to you all

Oh my! The foto with the Hamster are just too cute! I especially love the closeup of Hamster and Toby-Nose!!

Way to go Toby you are such a gentle doggie...I've never met a hamster so not sure what I would do with it. Good job on your training Toby...you'll be a superstar!!

BUT TOBY THAT'S NOT WHAT DOGS DO WITH RODENTS!!
(Oh, sorry, Gail has just reminded me you're not a terrier).
Toodle pip!
Bertie.

We are so impressed at Toby's manners and progress! But, as Gail reninded Bertie --- Toby isn't a terrier!!! Not sure what we'd do. I (JH) kind of like to tease little froggies when I find them in the summer -- just play, not devour. But a hamster -- hmmmmm.

Great job Toby. Wonder if we will get a blue mat. That little thing looks like a snack...
Benny & Lily

Wow, I bet that hamster was scared! I wouldn't dare try that with this crazy group here.
That's such good news that he bounded to the blue mat all by himself. I can't wait to hear how music class goes tomorrow.
Hellos to Tammy and Toffee too.

Sure is GReat to watch Toby's progress towards ANNIE. It'll be a GReat performance.
- TBH&K

I wonder what the hamster and Toby are thinking, they are great pictures.

What a gentle pup woo are, pops says I'd never be able to do that...play bows,

Great photo of your mom and you at the Open Breed Show. Very cool!

Schnapps is adorable! I hope he did not stay scared for too long, and that he figured out you pups are sweet and would never eat him.

So glad to read you are doing so well during the school visits. I bet all the kids love seeing you!

Hi - Just to let you know we're all thinking of you and the country tonight. All the worlds eyes are on Milpark.

so sweet and such a wonderful pup!!
xoxo

What a clever boy!
Toby must be such a joy and pleasure to teach!! I wish him all the best in his Annie performance!

I think I need to send my chihuahuas to you for training!

Those sure look like Maxdog's eyes on sweet Toby's face!

Hmm, Toby has put us all to shame :) Wow, what self control!

I'm pretty sure that hamster would be in R's stomach if he had a choice in the matter. In contrast, K would snuzzle the hamster and try to make friends. My two dogs are so different from each other.

Toby is very special, as is his trainer :)

Awwww, Toby and Tammy! You were soooo very sweet with that little hamster. I'm not sure I woulda been that gentle. After all, they're made out of HAM, you know.

Oh, and thank you ALL so much for coming to my Commentathon pawty! I'm just having the bestest time. Every day should be a blogoversary!

Those photos are just so so cute.. How gentle and look at the eyes they say it all. I think we have a star here for sure. No wonder the children love him.. Love the one your friend took too. One for the album.. HUgs GJ xx

How gentle you are with the hamster.
It sounds like your training is coming along just fine, Toby!

Wow Toby! We are super impressed by your incredibly quick progress - you will be ready way before Annie!!! Love the pix of you and Tammy with Miss R's hamster - what sweetie pies you both are!
Hugs xoxo
Sammie, Avalon and Ozzie

Oh yay, hammie!! I'm very sure Toby and Tammy would love the hamsters in our house! Our hamsters like to tease me too.

Toby is so smart, I'm sure he's having lots of fun with the trainings with you.

Toby,
The photo of you and your mom is so magnificently beautiful. The two of you remind me of a Heron doing a beautiful dance. Her arms are so graceful and you are so graceful too as you stand there.
You know what your doing- don't you Toby? And your sweet gentle soul- I just love.
I am not surprised of how gently you were with little hampster,
love
tweedles

What an excellent doggie you area. You still a baby, and a bouncy golden baby at that and you are so relaxed and intelligent and cooperative. We cannot believe how quickly you are training. If you keep this up, you'll be able to play "Annie" herself!

Hi Toby and Maxmom!!! OMD, so many exciting things are going on for you! Best of luck wiff Annie. And you are getting so big and handsome! And what self control!!! I wouldn't have been able to help myself with that hamster, and mom would be very sad if I eated him... but I am a RAT Terrier, after all! I wouldn't be able to help myself. Good fur you, Toby fur being so nice to Schnapps.

Lots of love to you!
Cloud and his mom

wow, toby, i'm totally impressed that you were soooo close to schnapps the hamster and resisted the urge for just the teensiest tiniest little nibble! mama says i should be more like you! heehee.
oh, and miss maxmom, i love love love that picture of you 'n toby from the show! :)

Greetings Maxmom and Toby, Loved seeing Toby up close and personal with the hamster-that is quite an accomplishment!!! The training sounds like it is going so well-great job to both of you!
Have a wonderful week.
Lots of love,
Noreen & Reggie-dog

We know without a shadow of a doubt that young Mr. Toby will be a PURR-fect gentle-dog with all of the children. We can tell in his eyes that he is kind and loving and that his ♥ is filled with goodness.