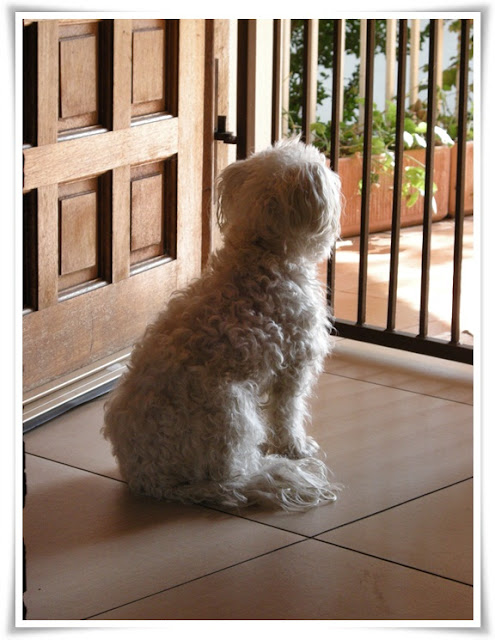 When my late mother relocated to Johannesburg in 2004, the fate of her 9-year-old little dog, Tommy, was in question.  After much thought, I decided to offer him a home (with my own three dogs) so that my mother could continue to see him.  Unfortunately the old-age-home which she went to didn't allow animals, so Tommy came to live with us.  We affectionately called him 'The Boarder'.  It was a difficult transition for this little dog who had become accustomed to a life of freedom.
In Mom's little village he had become accustomed to running around the neighbourhood at will.  He chased monkeys -  who teased him from the tree-tops - and sampled the food of various doggie-friends in mom's village.  Most of all though, Tommy was mom's 'heartdog'. His favourite place had always been on her lap, while she watched TV and cuddled him for hours.
In our home he had to became part of our pack with our strict routines.
This wasn't easy for this little dog, but he eventually settled down.
There is a lot to tell about little Tommy and I don't want to tell too much (It's all in my book - MAXDOG), but the thing that hit me most was his faithfulness to my mother.  After her relocation she was only able to see him on weekends.  Throughout Tommy's 6 years in our home, his favourite place was at our front door, where he waited patiently for Mom's visit every Sunday.  He never quite adapted to life in our household despite all the love we showered on him. He'd always been devoted to my mom.
This week, I came across this photo of Tommy and it made my heart lurch.
Many of us have stories to tell about the faithfulness of our dogs.  In Tommy's case this was evident by his habit of waiting for my mother's vist...at our front door...all week, until she arrived on a Sunday.  He loved my mother.  Even after her death in 2009, Tommy still sat by the door and waited for my mother - his master.  It was heartbreaking to watch.  He continued this habit until his own death last year.
As I look to the sunset, I know that Tommy and my mom are once again together.
What a faithful dog he was!
Sending lotsaluv

A beautiful tribute to a sweet dog (with a wonderful name!). Each one touches us in a different , but equally deep way. It's lovely to think of your mother and Tommy together again at the Bridge!

I firmly believe that little Tommy is now on your mother's lap receiving unlimited love and affection from his most favorite person on earth - now in Heaven.

What a wonderful tribute to that sweet faithful little dog who loved your mum so much. I know they will be together and having those lap cuddles he loved so much. Hugs GJ xx

What a nice tribute to Tommy
Benny & Lily

Seems like a lot of us are thinking about our beloved pets who have left us - seem to be a lot of posts with tributes this week.

Tommy need wait no more, now forever reunited with Mom. This was such a lovely tribute.

Can't wait to read more of the story.

Hi Maxmom, my dad gave me this snippet to give to you, "The heart remembers most what it has loved best."

My dear friend, Oh what a touching story this is; reminds me of our Reggie. He is such a loyal and faithful dog too. Can't wait til Maxdog is out so I can read more.
Hugs tonight,
Noreen

Such a touching story that it brought tears to my eyes. Your mother must have been a special woman to earn such faithfulness, and Tommy must have been an amazingly loving dog. Thanks for sharing your story.

Oh Maxmom that was a beautiful story. Our old girl Kara used to sit at the fence everyday at 3.15 pm and wait for our kids to walk home from school. Don't know how she knew but she just did. Bet your dear Mum and Tommy are smiling down on you. No worries, and love, Carol (and Stella and Rory)

Dear Maxmom
We also feel in our hearts that Tommy and your mom are together right this minute.
That is what we feel heaven is all about- a place where our favorite things will be,, and in this case, the bond between fluffy dog and master and they are together.
love
tweedles

Their faithfulness never seems to stop. When Chance (one of our pups from our litter) was returned to us, he stood for hours at the corner of the fence waiting for his "master" to come and get him. It was heartbreaking. It took him many months to realize the boy wasn't coming back. He eventually accepted it, but I don't think he's ever forgotten him. :(

What a good companion he was to her!

This story is sweet and wonderful but also a little heartbreaking. I love the dedication our dogs show us, but there's something a little sad about also. In the mornings when I leave for work I often look up and see Duncan sitting in the window looking down on me, a confused look on his face. And most afternoons when I arrive home I see him sitting there still. Now I know he doesn't spend his day waiting in the window for me (the messed blankets and pillows on the bed attest to that!) but it saddens me a little to see him waiting there.

Have you ever heard the story of Hachiko? It's a remarkable story but it also breaks my heart a little.

Thanks for sharing with us, Carol!

What a sweet post about Tommy, MaxMom! Thank you for sharing with us your tribute to your Mom and her heartdog.

Have a good weekend!

What a lovely tribute.

What a beautiful story. It reminds me of Greyfriars Bobby. What a good illustration of how important we are to them, as much as the other way round.