Sometimes mistakes can be VERY COSTLY....READ THE LABELS!!! 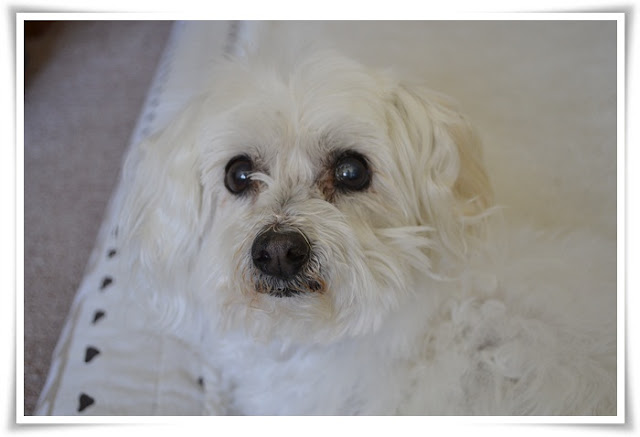 Everyone makes mistakes, but sometimes they can be REALLY BIG mistakes and they can become life-threatening!

My own, recent mistake has left me with cold shivers and a serious taste of bile in my mouth. Even though my error of judgement could have had serious consequences, (and I am likely to be slated by my readers)  I feel that I should share it ... in the hope that another negligent person won't make the same mistake as me.

Regular readers will know that KING TOFFEE is already 15 years old.  Up until now, he's been very active in his reign.  He does, however, suffer from arthritis, is almost totally deaf now and has very little vision left.  His teeth functionality is substantially diminished which has necessitated us changing his diet to totally soft food. 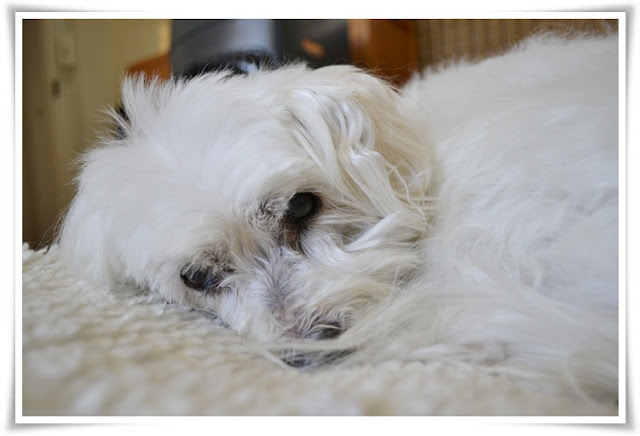 For a while we tried all the high quality tinned foods, as well as cubes (which had to be watered down into a soft mulch).  Toffee hated almost everything I offered him, until we discovered the Pedigree range of soft food. My vet's opinion was that, since Toffee was so old, we should honour his tastes.

"Give him whatever he wants..." he suggested.
"And Soft Pedigree dog food?" I asked
"If that is what he prefers, give it to him!  Why should an old dog spend his twilight years being forced to eat food that he hates? Give it to him!"

At first, I purchased the tinned food and would feed KING TOFFEE half a tin in the morning and a spoonful at night.  I kept the residue in the fridge, but have always hated feeding 'left overs' to my animals.  I was overjoyed to discover that Pedigree made small, sealed pouches of the same food for easy dispensing, so I purchased a large quantity for my little dog. The 'jack russell terrier' picture on the front of the packet suggested a similar size dog to toffee.  All I thought at the time was "Yay! A full meal in a single pouch." 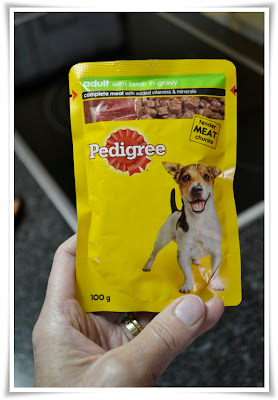 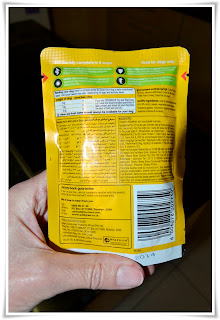 TOFFEE enjoyed one pouch in the morning and one at night - and he relished every last morsel.

What I didn't notice, however, was that the poor little guy was getting thinner and thinner over the weeks that past.  He has always been blessed with thick fur and always been remarkably independent.  In addition, he's been sleeping more, so he's not wanted to be cuddled excessively. We simply let him be.

About two weeks ago, Toffee became ill.  He started licking his paws excessively and also developed a penis infection.  He also started shivering and panting at the same time.  More veterinary checks  (which suggested that everything else was okay) secured him the correct meds: We put him on Prozac (which stopped his habit of paw-licking) and anti-biotics for the infection.
But Toffee wasn't getting any better..?
He was getting more listless by the day.
Despite all this, he was still enjoying his food and his regular walks. It was puzzling.

Last night, the shivering got worse and an inspection of his gums showed them to be extremely pale.  We gave him his supper and the shivering stopped for a short while but, as he was sitting on my husband's lap, he started shivering again.
My hubby remarked: "I think Toffee is hungry."

By this stage we have been prepared to try everything, so I took him back to the kitchen and gave him another packet of the food.
Thankfully a small voice inside me told me to "READ THE LABEL!!!"

Only then did I discover my terrible, terrible error...

Over the past month, I have been slowly starving my poor little dog.  We have been giving him only TWO packets of the food instead of the required FIVE per day.  The pale gums, the shivering, the excessive sleeping and the general deteriorating condition now all make sense. My error may have have been extremely costly to my poor little dog. I just hope he recovers fully.

Yes, I have rectified it:  Toffee is back on his required volume of food and is doing much, much better (after 24 hours), but it doesn't make me feel any less guilty. He's been suffering in silence all this time.

I accept that this is all my error, but I would also like to give a caution to the manufacturers of these pouches.  PLEASE ...Your labelling can be made clearer!

Is it not reasonable to think that one of these packets is the correct quantity for a full meal?
I thought so and Toffee has paid the price.

READ THE LABELS ON THE DOG FOODS! 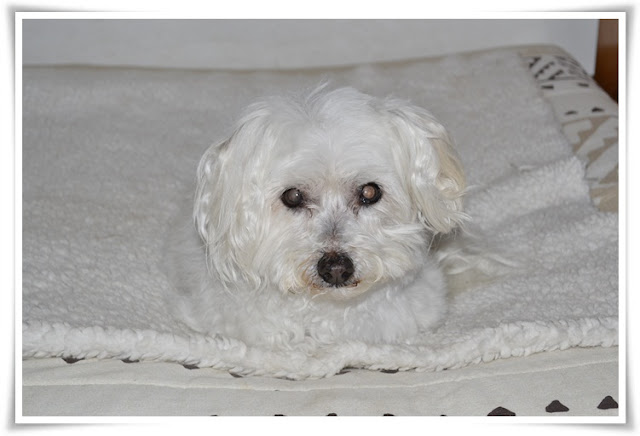 I am so, so sorry, SWEET KING TOFFEE!

Caryl, I would probably have made the same mistake. I buy pouches of food to feed my kitties for their morning treat and they free feed the rest of the day. Don't be too hard on yourself. You found the mistake and made changes. That is all any of us can do - we're human, not perfect like our dogs☺.

We could see how that mistake could be made with them little food bags. Especially considering the size of King Toffee. So glad you realized the mistake and you have him eating lots know. We have our paws crossed he will be feeling much better real soon. Thanks for sharing your story as we could all make this mistake as well. Sniffs, The HoundDogs and Mom

Thanks for sharing! Like Scout & Freya mentioned we are human and not perfect like our dogs. We have all made mistakes but the fact that you realized it and corrected it, is GOOD!
The warning to read labels is much appreciated. Even if we usually read them, sometimes in a hurry we don't - this is a VERY good reminder.
Wags
Ernie and the pack and mom barb

It could have happened to anyone, MaxMom. We bet King Toffee is very happy to be getting much larger portions!

The King looks very happy in that last photo! It's a mistake any of us wwould have made. How silly - % packets a day?? No one would ever think that you'd feed a little (big) guy that much. Good thing your husband has good dog-intuition!!

Hi Maxmom, fortunately you discovered the reason for these issues and now it's a lesson learned and you've provided us all with a good reminder. So let the guilt go. You didn't do this intentionally.

I don't think you're wrong to assume one pouch would equal one meal. That seems perfectly reasonable to me. Pedigree needs to make that clear on the label.

I'm thinking good thoughts for the two of you. You've been a good companion to him and will continue to be one for a long time. He's not done yet!

Oh I am so glad that at least you worked out what was wrong and Toffee is doing better now.
I totally agree with your vet, that when you reach a certain age, your tastes should be honoured. If only my ninety year old Dad had a doctor who thought that way. Rather than one who has added to his confusion by telling him to drink reduced fat milk -the cheap and nasty stuff, in Dad's terminology - when Dad is already too thin and does not suffer serious heart problems. Worse, the doctor has suggested Dad give up alcohol, one of his few remaining obvious pleasures. Fortunately Dad is ignoring that particular bit of advice.
So may dear Toffee enjoy many more packets of yummy soft dog food.
Cheers,
Gail.
PS Sorry about the rant!

I am so happy to hear that King Toffee is feeling better.
It was an honest mistake- that I am sure I wouls have made also- if using pouched foods. Who would have thought 5 pouches was the correct amount?
I know you felt really bad- but its all okay now and King Toffee is happy too.
love
tweedles

Hi, You have really convinced me to not only check the labels but follow how much they say to feed. So often the amount seems like a terrible lot of food so I'll admit freely I haven't always paid attention, until now. Thankful that King Toffee is fine now. Thank you for sharing too Caryl.
Hugs, Noreen

Dont beat yourself up as it was a genuine mistake. We all know so well how you love your dogs and would never knowingly hurt them. I for one will heed your advice and check the labels. Thanks for letting us know and I hope Toffee is back to normal soon.. Hugs GJ x

You are right that packaging is often unclear. Changing food types can be really confusing. Riley always looks at me like I'm starving him! Food is his passion, so I check his ribs and weigh him at the vets after collecting every two 15kg bags of food to see that his weight stays about the same - but with a small fluffy dog it would be so hard to notice the same percentge change in body weight.

Thanks for reminding us all to read the labels. I am so glad you have found out the reason for Toffee's symptoms.

What an easy mistake to make. I am glad he is ok. :)
~Maggie

I do think you made a reasonable assumption. However, I'm glad you read the label and solved the problem before things got more serious.

So glad King Toffee seems to be doing much better.

Oh Maxmom, don't beat yourself up over this...you did nothing to harm Toffee intentionally! I'm glad he perked up after getting the right amount ...

This is so good to know...I would have made the same assumption. Thanks for the information and let the guilt go...Sweet hugs to the King!!

poor baby....good to know, we all learn from our mistakes
Benny & Lily

wonderful post.Never knew this, regards for letting me know.