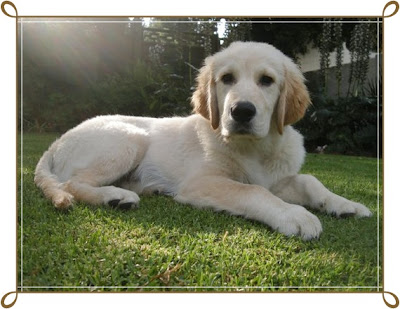 Hello there to all my friends around the blogosphere.
The rains are here and it is clear evidence that summer is with us.
We've had 24 hours of rain with intermittant sunshine. Everything looks shiny and clean in this large city of ours. 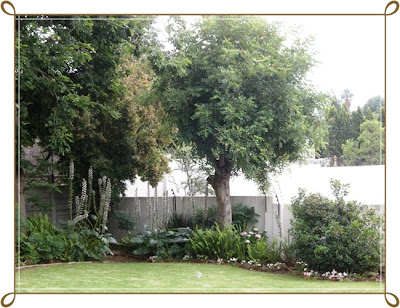 Birds are in abundance and many of them are fledglings.  The ones that don't survive are eagerly retrieved by our pooches who then quickly convert them into chewing gum.  I'm learning to be vigilant in order to avoid their inevitable 'garbage guts' which follows the swallowing of such tiny, boney morsels. Thankfully, many fledglings do indeed survive and our garden is abuzz with happy twittering. 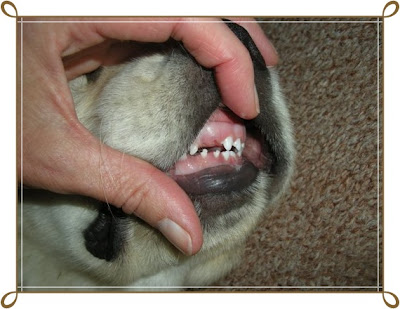 Toby is 'all legs' and new teeth at the moment.  As you can see, he's lost one in the front of his mouth.  I am so keen to find one (for keepsake), but geesh, they are elusive little devils! Any suggestions? 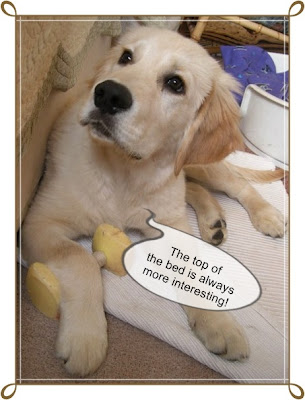 Our young pup is a bundle of energy at the moment, but incredibly affectionate to both canines and humans alike. 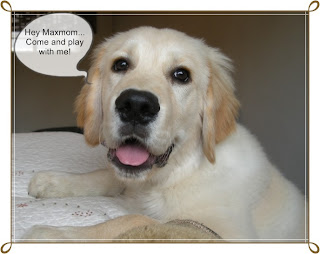 Today I forgot about his lunch and he reminded me later in the afternoon by bringing his soft sheep toy to me and whimpering.  His active tail also told the story of his tummy grumbles.  After much remorse and apologies, he had his din-dins. I made up for my error with a brisk walk afterwards. 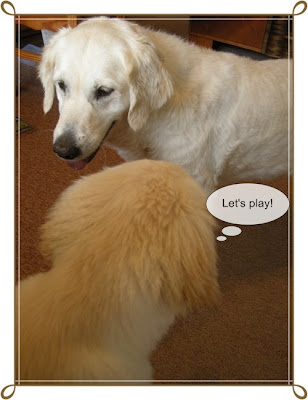 As usual, Toby spends his entire day in Aunt Tam's company.  She is making up for any lost puppyhood.  She simply adores him! 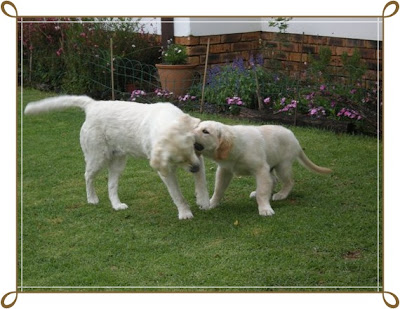 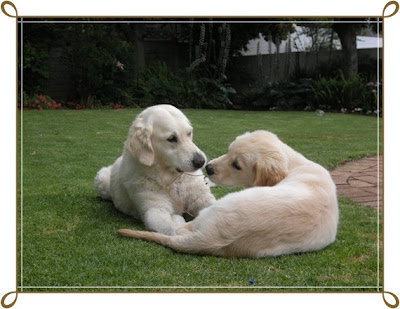 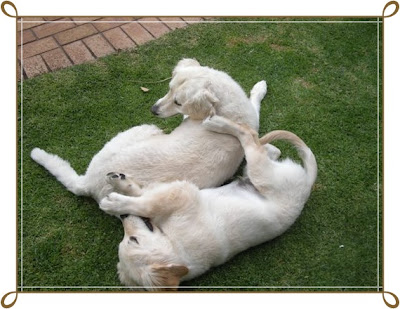 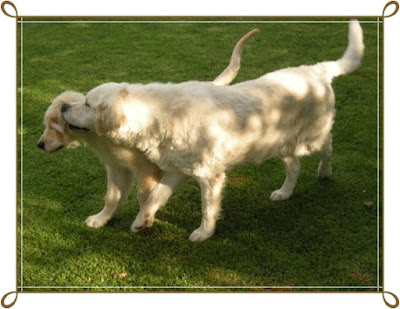 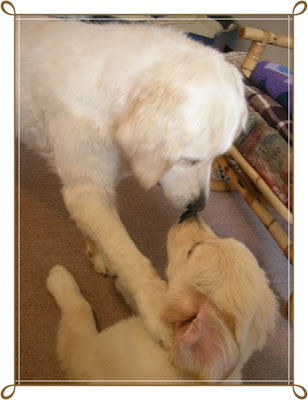 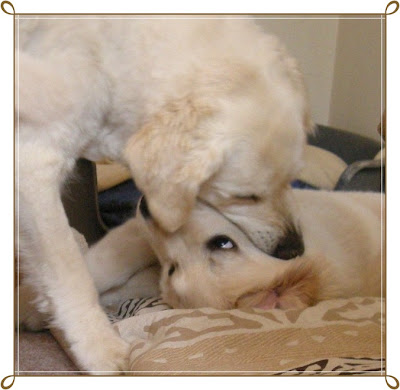 My sweet hooligan remains exactly that...
A SWEET HOOLIGAN! 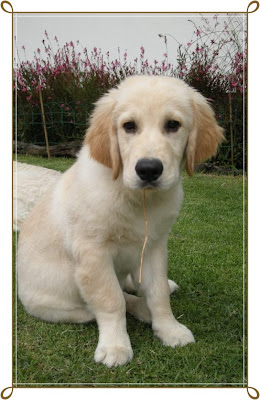 He and Tammy run trenches in my passage, he steals the washing, he fishes in dustbins, he robs me of all my treats, he terrorises King Toffee, he dispenses cuddles, he whimpers endearingly, he carries around his blanket, he shines in his obedience (sometimes), he barks as though his voice is breaking, he is fascinated with helicopters, he poos on the pavements (I'm forever picking up his waste)....but...
I WOULD'NT CHANGE HIM FOR ANYTHING! 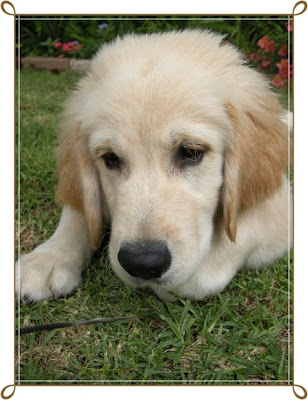 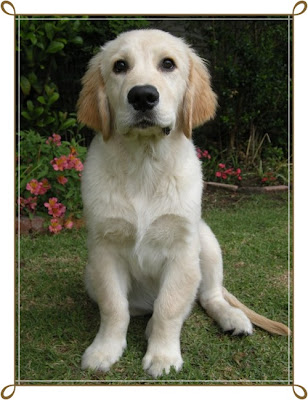 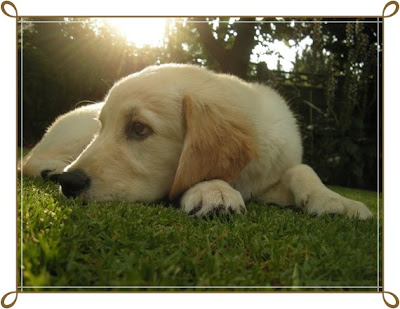 That's all for now!
Wishing everyone a really happy Wednesday!

Yipee!!!! We get to comment first. We are delighted to be witnesses of how well and happy Toby is growing up these past months. He truly is a bundle of joy and energy.

The photos with Aunt Tammy are simply beautiful.

We hope that you enjoy more sunshine and fun walks.

We hope that all is ok with you, Maxdog Mom. =)

What a wonderful post!! It is always so nice to see Toby and Auntie Tam together. It looks like Toby has brought out the puppy in Auntie Tam which is a great thing! Those little puppy teeth..they are hard to get...I never was able to get any of Hollys...they simply kept vanishing. Does Toby help with the laundry like Holly used to do...by grabbing everything in the laundry basket and running off with it? Toby is looking great along side of Auntie Tam!! Have a wonderful day!! Lots of love, Holly and mom

Love seeing Toby pictures. He's so sweet. Pay attention when you run the vacuum cleaner, that's how I found the puppy teeth I found.

Your photos made me smile. It is wonderful that Tammy and Toby have become so close.

Check Toby's soft toys and blanket (and the floor beneath) for teeth just after he's chewed or carried things. That is how I found 8 of Riley's 28 puppy teeth. The rest mysteriously disappeared. I'm guessing he probably swallowed some with his dinner. I just looked at Riley's puppy teeth again and all three types are so tiny.

Mom never found one single tooth from Ciara - guess she ate them:)

We are constantly amazed at the resemblance between Toby and MaxDog - it is so unbelievable.

Beautiful pictures. I cannot believe how big Toby is getting. He is so adorable.

Toby get more handsome with every post. What a good boy he is. Best of all he has his Aunt Tam to show him the ropes and to be his rock. Having a pair of Goldens. Nothing better.

We've been bad bloggie pals again, but it's wonderful to see what Toby's up to - we heard he graduated from puppy class - congrats Toby!!! You are just so big - bigger than Avalon at almost 8 months! Amazing - he is just beautiful and Tammy is certainly a wonderful Auntie - so tolerant and sweet!
Hugs xoxoxo
Sammie and Avalon

Oh what wonderful pictures. Tammy looks like she could be his mama. It's wonderful to see them so attached!

What a sweetie - and growing up so fast.

We are so glad that Aunt Tammy adores you, Toby. So do we!

I don't think I'll ever, ever gets tired of looking at pictures of Toby and Aunt Tam. You can just tell how much they luvs each other!

Oh, and my mom has a furend who has a puppy and her vet told her that puppies actually end up eating a lotta their baby teethies. So maybe you could try looking through his poops! Um, why did you just make that face?

Da pictures today are so wunderful. Mom and me can't beleeves how big Toby is gettin'. :)

Toby is growing into such a fine young pup!

You know, I always wanted to save one of Shiver's teeth too as a keepsake but I never did find any.

Tammy looks so happy. I hope King Toffee is too.

Hope you put your tooths under your pillow. The tooth fairy will bring you a treat
Benny & Lily
Love the header

Toby,
I am shocked that every time I see photos of you,,, you get more and more beautiful.
Inside that growing body, you are still a baby boy.
I love the photos of you and Aunt Tam... and I love all the stories of how you are the sweetest HOOLIGAN ever!
love
tweedles

It warms my heart to see Tam and Toby together...She is such a sweet girl!
xoxo
~K

Aww, they look so cute together! Love the gorgeous peeks!

You really should look in the poopies for the missing teeth! A found one of mine in the poopies! She couldn't find the rest though.

Awwww .. sounds like efurrything is just as it shud be. After all, if yoo can't be a hooligan when yoo're a puppy, when can yoo be one?

Listen while Toby is eating - and if he seems to spit out food - sometimes you'll find one of bigger teeth! I "found" about 6 of Neeli's needles (oops, I mean teeth) when she was a puppy!

Love the pictures of Tammy & Toby together - pure sweetness.

Toby is so big! He's almost as big as Tammy! Wow, think of what a handful he'd be if you didn't have Aunt Tamm the built in sitter!
Still, he's a doll.

He is both a sweet and a very cute hooligan. He captures my heart in each photo!

I've somehow managed to find one puppy tooth from each of our dogs over the years. Most times, I found it by noticing that the puppy's gum was bleeding and then searching the immediate area exhaustively! They're tiny teeth and hard to find. Good luck!

How wonderful that Tammy has a new playmate - and that she likes to play with him! We were hoping Sam and Monty would play like that, but so far they just tolerate each other. Occasionally, one chases the other in the yard, but it is a rare occasion.

I ad♥re the fact that Toby and Tam are so close. She really needed this pup to come into her life!