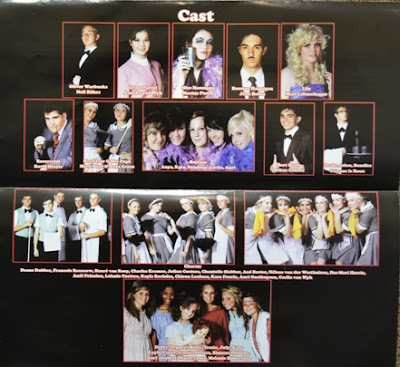 Whew, what a day! What a week! 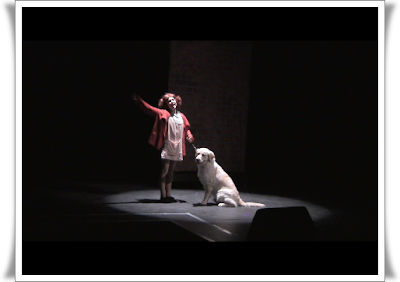 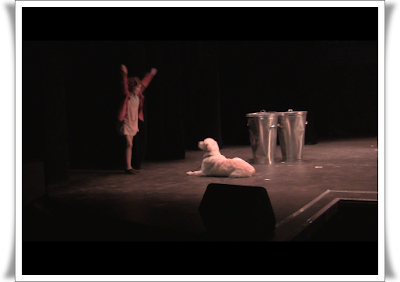 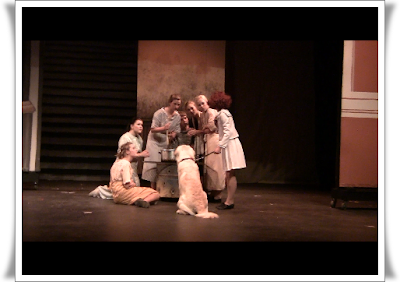 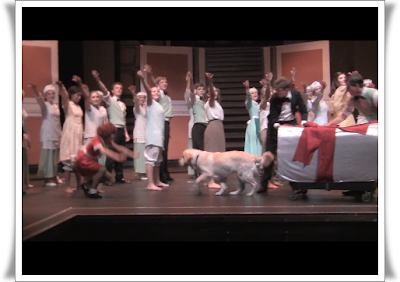 After a full technical rehearsal on Monday -(getting home after 11pm, and getting very little sleep), as well as two full performances yesterday (one a matinee, the other the official opening night), the long hours at the theatre and the many weeks of practice runs are finally taking their toll.
Both Toby and I are utterly exhausted.

All this work for only 4 scenes, a total time amounting to approximately 5 minutes max.

There are still three performances to go.
(Tonight, Tomorrow night and the gala performance on Saturday night)

Thankfully, today we would have had at least 19 hours of rest before the show tonight.

My motto is still: "Seize every moment, because this is an incredible privilege!"

I am beginning to understand the paradigm of a dog - in terms of being tethered to a leash...

I have been attached to Toby's leash, with him in the driving seat, for three full days.
It's not easy.

(Both Shannon and I had a silent weep of pride in the wings).

What a star he is!
uhmmm...'was'....
So here's the story about the official 'Opening Performance' last night:
A lot of empty spaces in the audience, which comprised mostly of students from Hoerskool Randburg. The combination of Toby's excellent comfort levels of 'being on stage', combined with his 'lack of rest' was not a good one...
Now that Toby realises that his handlers won't actually be joining him physically on stage,  and that this is a setting with endless supplies of treats and rewards, he seems to think...
"It's probably time to experiment a bit with my new turf...
How about we try some walkabout?"
...particularly last night's performance
(much to the audience's delight, of course..!)

Yes, his performance last night was...
mmm, shall we say.
...not his best.
He decided to explore the stage during the scene and then in the next scene required extreme encouragement for him to leave the stage...
Sweet hooligan!

But did the audience notice the deviation from script?
The comment I received from someone:
"It was innocently apt"
Admittedly he is EXHAUSTED.

With two performances in one day - one absolutely flawless and the other; 'a pass', the demands have taken their toll on my young 10mth old pup. Hopefully, our rest during today will ready him for his next attempt tonight.
Whatever he produces, the fact remains - we have done everything possible to prepare him for his stage debut, and we have to remember...He is still a dog...and a young one at that! 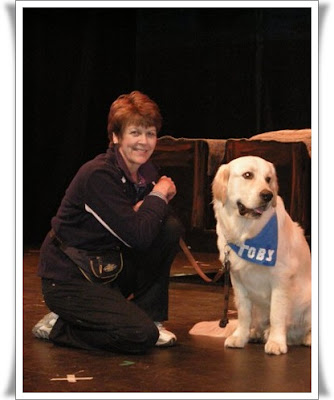 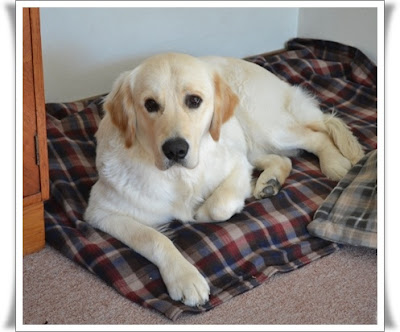 Come on Toby, you can do it! 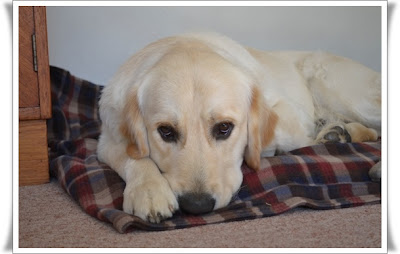 Sending lotsaluv to you all,
MAXMOM IN SOUTH AFRICA
Shared by Maxmom

How exciting. Toby has decided he loves the theatre and needs to spice up the script a bit. I am sure that everybody was captivated by his performance. I hope you get some movies (and some sleep).

You must be so proud of him, even despite a few oops!
I think he looks great on all the pictures.

Hey Toby, WELL DONE! You are such a star! Love to photso. And anyone who is perfect ALL the time is just, well, so boring...
Toodle pip!
Bertie.

Toby the star!! So wonderful....
xoxo

Such a great story about Toby and his acting career. So young and so talented, it's amazing to come so far. Congrats to both of you - hard work....paid off.

As they would say in Scotland - Toby , you're a wee stunner !

Way to go Toby. Give a bit of YOURSELF to your Character!!! I am sure you Stole the Show!!

Toby, no matter what you do or how you do it - remember this - you are l♥ved beyond reason by your momma and that l♥ve will never, ever change.

Way up here in northern Michigan please know that you have a fan and a surrogate 'auntie' that is hugging you and kissing you and holding you tight knowing that you are a STAR, now and always.

I think that Toby would be *the* star regardless of what he did on stage. I love the story of his improvisation but I'm sure that it had you on edge! I hope that you both get plenty of rest so that Toby is focused on stage tonight!

He definitely STOLE the show!!! Well, my paws are crossed that he does everything better in the next few shows. Keep us updated!

Sounds like he really was the star of the show!!! Lovely photos - hope he's going to send us all an autographed pic!!

Yes Toby you can do it I am sure. You are a star in my eyes anyway.. Hugs J xx

He can do it and HE IS doing it!!! I'm so very proud for you both. Just because he's smart enough to take a stroll around stage and know you won't come get him---that's live theater!!!
With rest you will feel better and Toby will do what Toby does. Whatever it is will be fantastic!!!
Go TOBY!!!

Mom and I are so very PROUD of you! Congrats!!!

I thinks that you is doing a pawsome job. You is not just young you is darn near still a babe! So I thinks if you consider that you are truely a STAR!

Your a STAR in my eyes! Mom's too!

You Go Toby,
We are all proud of you.

We are so proud of you, Toby! We knew you'd knock 'em dead!

Congratulations! We are so proud of you! To have your very first performance be flawless is such an amazing accomplishment! You and your mom have done such tremendous work!

I can just imagine how tiring it must have been, especially with all of your senses working overtime - all the sights, sounds, smells, action, etc. I am tired just thinking about it!

Can't wait to read how the rest of your performances go, especially the big final performance. Good luck! You are amazing!

Toby
I applaud that you want to "spice the preformance up" a bit.
They all need to listen to you.
Look how the audiance loves you!
You are a star,, a shinning one in our eyes,, and if you want to spice it up every nite,,, that shows how diverse you are.
What ever you do,, its perfect in our eyes, and we love you so much!
love
tweedles

I think that you are doing wonderfully. I'm 4/ ½ and my mum couldn’t guarantee what I’d do on stage with so many distractions, so for a young pup you’ve already shown (in the matinee) that you can do it and in the opening performance I’m sure you were just seeing if you could get even more applause for doing some things your way!

My mum and I are so proud of you and your mom for getting you up there under the lights.

Lots of love and woofs,
Riley