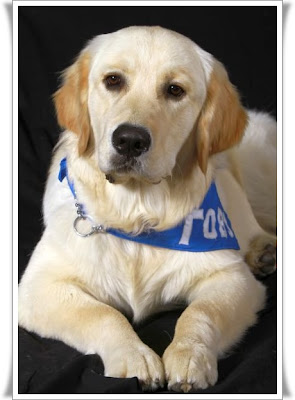 (Photographer: Rian Geldenhuys)
It was the second last rehearsal last night, before we finally move to UJ theatre.
Toby is simply...
FABULOUS! 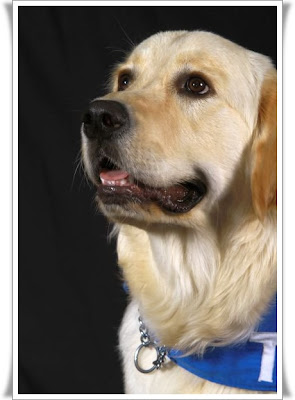 (Photographer: Rian Geldenhuys)
The production and the entire cast are finally coming together.
The music is beautiful, the dancing delightful, the acting awesome
and Toby ....
too sweet for words!
He is a true doggie star and the kids are so proud to have him part of their show. 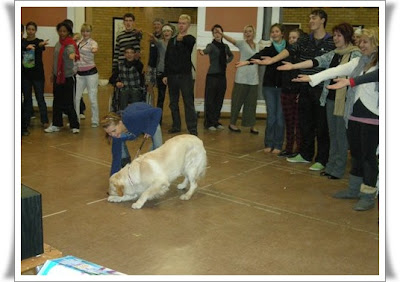 (The finale: Toby doing a bow for Annie)
His actual scenes, during the show however, are very short indeed.
Although this is potentially a little disappointing for audiences, this is entirely purposeful, so as not to put him under any pressure whatsoever.
We have to remember that he is still young and impressionable and it would be unwise (and unfair) to keep him onstage during the hectic dancing routines. 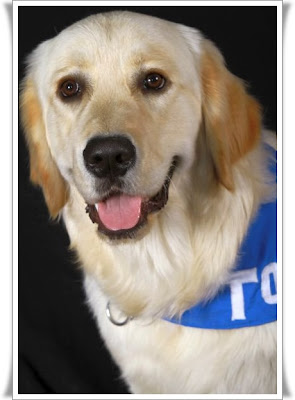 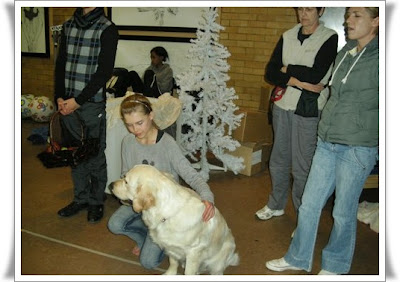 (Annie interacting with Toby before taking him 'on stage')
He adores her and respects her direction. 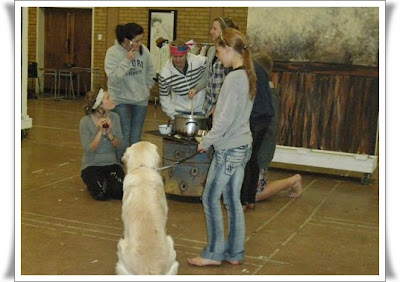 (The 'feeding' scene...Toby's best! :))
I was so pleased and silently proud of this talented young woman.
She is such a tiny little thing, but she is so inspiring and perfect for the role. 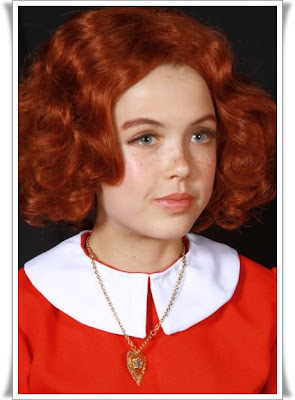 ('Annie' in full costure.  Photographer: Rian Geldenhuys)
Toby and Elna (Annie) have a unique bond and he is willing to do almost anything for her. 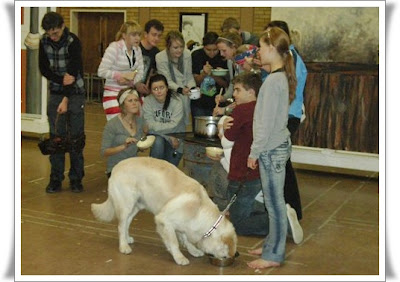 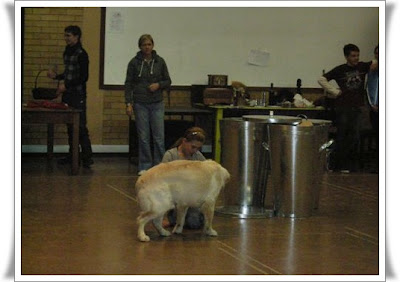 ('Did they hurt you?'... Annie and Toby during the first scene where she 'finds him in an alley')
The actors really got into their roles last night.  'Mr Warbucks' too.. 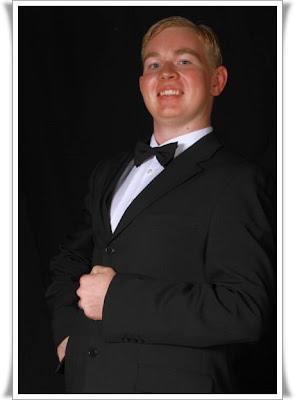 ('Mr Warbucks' in full dress)
The scene, immediately preceding the scene where Toby comes onto stage by himself, requires Mr Warbucks to carry Annie offstage in his arms.
Warbucks and Annie were really acting their parts last night, and when Toby saw Annie's demeanour, whilst she was in Mr Warbucks's arms, his face just dropped.
He was so concerned about her and desperately wanted to go and ensure that she was okay.
Unfortunately, it was the exact time for him to go onto stage, on his own, out to his appointed mark in the middle of the stage.
Despite his concern about Annie, the scene was done perfectly.
Afterwards, we took him to Annie to show him that
'She really is okay, Toby!'
It was tail wags all around.
He is so, so cute! 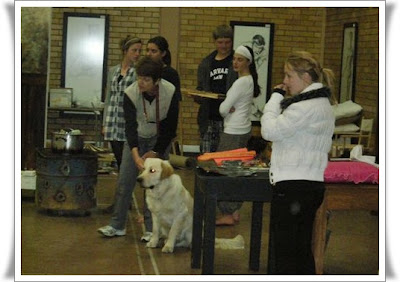 (Me and Toby waiting to send him onto stage, on his own, to his demarkated spot) 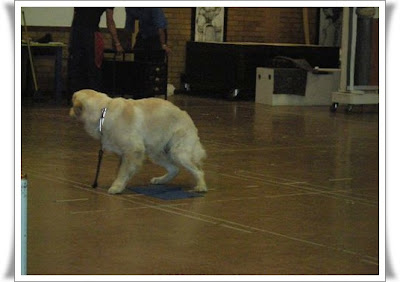 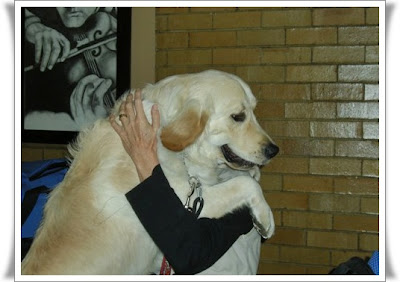 ("I did it, Maxmom!")
This morning, we are off to the UJ theatre for some more stage familiarisation.
We have a long rehearsal on Saturday  and a well-earned break on Sunday.
On Monday, it's crunch time!
It will be the technical rehearsal were the producer/directors/teachers/theatre team painstakingly go through all the technicalities of the production - lights, sound, music, etc, etc.
For them, it's a whole day affair - 12 plus hours!!!
Toby, Shannon and I, however, only have to be there at 3pm for his own technical run.
Then at 7pm it is time for the full dress rehearsal. 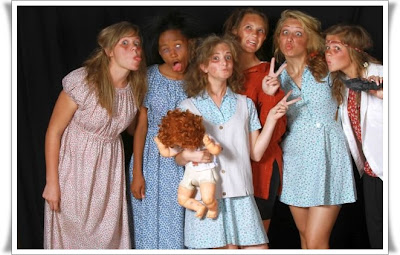 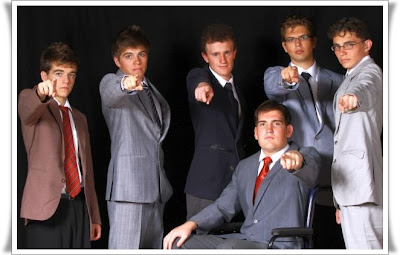 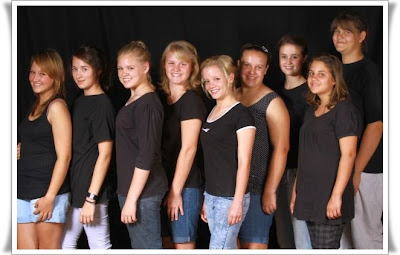 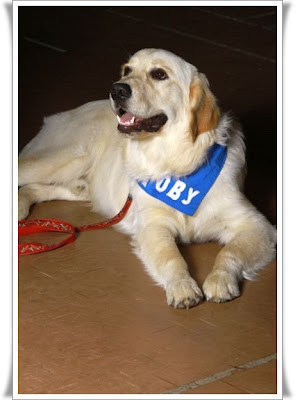 (Photographer: Rian Geldenhuys)
He is so excited to take part in the various scenes and again, I must say, that I feel enormously privileged to be a part of all this.
Thank you, once again to the cast of Annie, the backstage crew, the teachers and everyone involved at
Hoerskool Randburg.
A special thank you to Tina, our amazing director,
and Shannon
(Toby's main trainer from McKaynine Training Centre)
Last, but not least, to...
Toby...
this amazing dog of mine, who brings me such joy.
Thank you, my boy!
All that remains now is.....
Bathtime on Sunday! 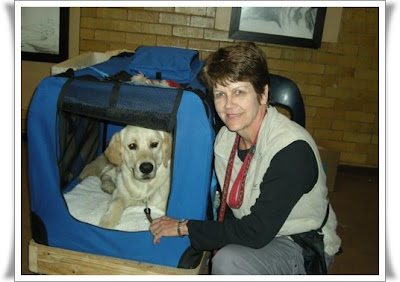 Many of my readers have been asking about videos/DVD's of the production.
I will do my best to try and make these available through the efforts of some of my friends, as well as the organisers of the production.  I am however totally reliant on others for this, as I will be handling Toby throughout the various shows.  Hopefully this will all work out and the footage will be available for our friends and readers after the shows. Unfortunately I can't promise anything.
Sending lots of love to all my friends and readers across the world.  Once again, I apologise for not visiting your blogs - it's simply too hectic at the moment.
Till next time, with love...
MAXMOM IN SOUTH AFRICA
Shared by Maxmom

Well of course Toby is simply FABULOUS. We always knew that. Duh!
Toodle pip!
Bertie.
PS from Gail - apologies for Bertie's cheek, I am trying to teach him some respect....

I LOVE Annie's makeup. She looks so cute & so young with those freckles on her face & big red hair. And I must say, that's one very friendly-looking Mr. Warbucks! The one in the movie is pretty stern looking.

Best of luck with the performance! We will be rooting for you & Toby right here in our homes.

This is sooooooooo exciting! How we wish we could be there!

I am so excited about this!! I know it will go wonderfully!!

I also know what you mean about the 'pressure' on Toby. Back when we first got Charlie (Wheaten) the company called 'Old Navy' wanted to lease him for their ads. At the time I just felt it would be too much for him, as he'd just been 'rescued.' So, knowing your dog and what they can handle is so important, and I continue to admire you for knowing Toby so well, and knowing what his limits are.

I'm sure the show will be a big hit and Toby wil be the star! Of course I only need video of the parts when he is on stage. No point watching those humans bouncing around, right? Hehehe.

We're so excited for you and him and just know it will all go terrifically (a word?).

The effort that it took to get Toby ready for this production was monumental. Your dedication to this effort is to be admired. Caryl, I don't know if I would have been able to do all you have, and for so long, and with such resolve. You are a remarkable woman - stand up and take a bow.

Add to your immense talent as a trainer the fact that you were blessed with a puppy who excelled at obedience and hung on your every word and direction. My gosh, the two of you are a pair that I expect to see 'go places'. Annie CANNOT be the end of Toby's career or the end of your efforts training him. He's so young and there are so many mountains to climb and rivers to cross and adventures to share.

You KNOW that on opening night I will be there with you in ♥ and soul. I so wish I could be sitting next to your family on opening night. One thing we MUST do when I am in SA is to watch the DVD of Toby's performance together. We must!

Fabulous Photos and I know that Toby is gonna STEAL the SHOW!!!

What a nice looking cast. You must be excited
Benny & Lily

How cute of Toby to have been worried about Annie!
I'm sure he will act great, just to make sure, I'll keep my fingers crossed for him, but I'm sure he does not need that!

I'm not sure why - but this brings tears to my eyes as if I am the proud Mama myself. Congratulations to you, Toby and the whole crew for working so hard to get Toby trained to do this. Wow-what a totally amazing experience! He is simply gorgeous and I'm sure his big brother Max will be grinning too as he looks down on his baby brother's stellar performance.

Oh Toby and MaxMom my Mom and I sure wish we could be there in person. But we will be there in spirt!

We wish you so very much luck! Not that you need it Toby! We know that you will be Grrrreat!

Have a Grrrrrreat Weekend!

Wow it is so exciting to read about the prep for Toby's big day! We are so impressed with how good he is doing - he seems to have a natural affinity for acting! And the fact that he was concerned about Annie is just adorable!

You two have done tremendous work and I am sure you are both so excited for opening night. We always knew Toby would be fabulous, but he could not have done it without MaxMom!! Congratulations to the both of you!

Such a happy and thrilling post to read. Loved all the photos. Annie is adorable! The entire cast is very nice looking!

What a sweet story about Toby being concerned about Annie's well-being. That proves just how much Toby has bonded with her, and how big his heart is!

I was just going to ask about dvd's being made available so thank you for answering that question for me.

Do you think Toby will be acting again in the future? He seems to have a natural ability for it.

Oh my goodness, Toby - this is SOOOOO exciting!! I'm starting to get all nervous too! But I'm sure everything will go wonderfully - you're such a great doggie actor!

My eyes have tear as I read this.
Toby is amazing.
And you are amazing Max Mom,,, for stepping forward to take this journey with Toby... a world that was unkown for both of you..
Toby is touching the hearts of many,, in fact the world!
I wish we could be there too.
love
tweedles

We are so excited for you and Toby! We will be thinking a lot about you in the next several days!

Oh Maximom, you should be very proud of yourself. Toby has certainly shown his full potential with his new acting career. This is so exciting. All the best for the first show. Good boy Toby. No worries, love Carol.

OOzing with pride no doubt!

We are looking forward to seeing Toby in action in the show!!! I'm sure he'll do wonderfully!

All the very best Toby! We can't wait for opening night!!!