Yet another unexpected surprise! 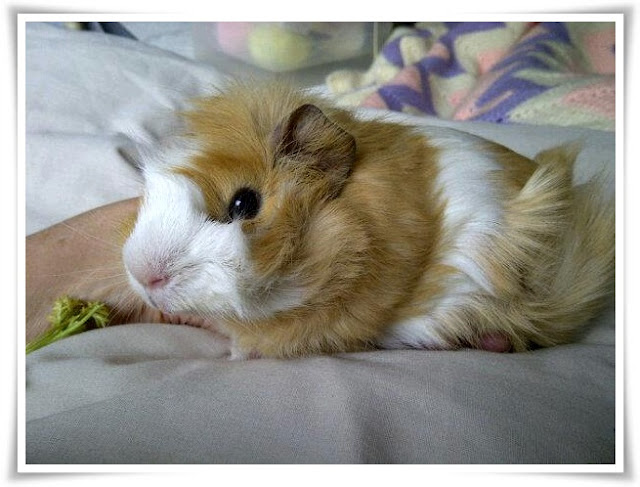 "What's up, Twix?" I ask as I hold the little guinea-pig in my hands.

In the past 6 weeks, the little thing has blossomed big-time.  She's undergone a miraculous transformation.  In true Guinea-pig-Cindarella fashion she has morphed from a malnourished, bitten and terrified little GP into a real beauty. This has all happened since the 13th July.  It's amazing what a little bit of TLC and some good food can do for an animal.

Yet, something is not quite right with littleTwix.  Only three days ago she bit me.  It was totally out of character and led me to question what on earth is going on.  Usually she's tame and more than willing to cuddle, but this time I got a firm warning not to press my luck.  What's up little one?

"Maybe she's lonely," I suggested to the Boss.  He shakes his head in disbelief - knowing that I'd buy another GP at the drop of a hat in order to alleviate her angst .

"Well, what's going on?" I re-direct.  He keeps shaking his head.  It's mystifying.

I lift the little pig onto my chest and sit down in a comfortable chair.  I am determined to spend some time observing her and attempting to uncover the mystery.  What is ailing her?

Suddenly it happens and realisation hits me.  My fingers are tucked underneath her and a small, but all-too-familiar ripple pulses across my fingers - it's the unmistakable sign that a miracle is underway. I look at her in total surprise.

"Ummmm.....I have a feeling that Twix is pregnant!"

The Boss dissolves into a fit of laughter.  It's the second time this has happened to us...'Purchased Pregnant!'  It appears that not only was she in shocking condition when we 'rescued' her, but she was pregnant as well....

How can this possibly happen to a single household - TWICE in a matter of months?  Twix has had no interaction with the other GP's belonging to Miss R.  Besides, 'Scotch'  (the male) has been neutered.  Little Twix, despite her appalling state when I rescued her, must have been pregnant before she arrived.

I simply can't believe i!.  She was so, so young when I 'rescued' her.  Yet, the miracle of life has defied us all.  It's only a matter of time before the inevitable happens and our dear little Twix will finally have the 'company' she may have always wanted.  Oops!

Isn't this simply miraculous? I am in a state of disbelief. 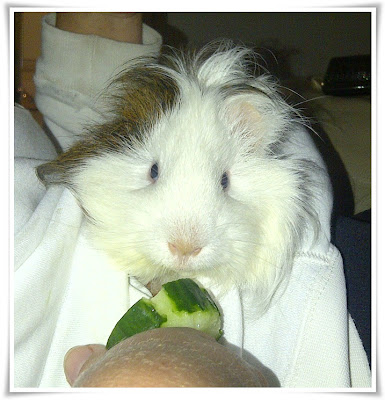 ps.  Please spare a thought for dear "Mr Scotch" who will be undergoing an operation tomorrow to remove a tumour.  Miss R is pretty worried about him.  He's been a good companion to her...

How fun! We can't wait to see the babies!

Oh my!!! Tell the Boss that at least you didn't "have" to purchase another one to keep her company....LOL
Can't for more of the story to unfold. Prayers for Mr. Scotch.

When you kept writing about how much Twix had "filled out" I kept thinking she might be pregnant but didn't mention it. I guess we all thought it was your good nutrition. Here's hoping she will make a great mom and have an uneventful delivery. Sending prayers for Mr. Scotch too.

How exciting! What good love and some tender care will do. Little did you know that you were helping Twix save her babies. We can't wait to see the them. :)

hahahaha! That happened once when I rescued a very affectionate kitty when I was in college. SURPRISE!!

Well that sounds good news about Twix. Never a dull moments with the Moll Menagerie! Will you be keeping any of the wee guinea-piglets?

PS A field trip to South Africa would be wonderful!

Oh This is going to be exciting
Benny & Lily

awwwwwwww - Twix is going to be a mommy!
We're sending lots of positive thoughts Scotch's way.

How fun it'll be to have babies around!

Scotch is in my prayers.

Twix is adorable, and what a lovely surprise! So glad you noticed! And yes, that is odd that it has happened twice! God must know you can handle it. :->

Suka's paws are crossed for Mr. Scotch and our prayers will be with him as he undergoes his surgery.

We hope that Mr. Scotch will be fine. MaxMom - you'll be operating a gp ranch soon.

Wow, she will be a Mommy piggy. Go Miss Twix!

Oh my! You are going to be overrun with little piggies soon.

Gosh, I am a little late in visiting
(due to the sickies) and so I am sending good thoughts for Scotch!
And of course for the mama to be!
love
tweedles