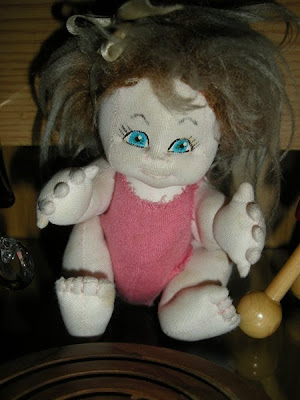 MEET 'CHERYL'
Hello there to all my readers!
I have been put up to a challenge of writing something entirely different today, so here goes...
---xXx---
The birth of my first child, so many years ago, left me in a state of awe and wonder!
How was it possible that something so perfectly made had landed in my lap?
I was in awe of the detail that went into the physiological planning of such a small human being and admired the power behind my child's creation.
It was soon after that when I joined up with a group of women to learn the art of 'cloth doll making'. We were a small, enthusiastic group who put our sewing needles to cloth and churned out these dolls. They ranged from dolls that were the size of actual babies (with all their parts) to miniture creations of similar type. The dolls were fully jointed and their eyes were either embroidered or painted.  Careful attention was paid to their toes, fingers and belly-buttons alike. The unusual thing about these dolls was that they were literally sculptured from the inside out.
One of the standard tools of doll making was a long, sturdy needle which served to pull the stuffing in various directions on the inside of the doll and to anchor it somewhere on its body. Standard patterns were handed out, yet each one emerged from the creator's hands as absolutely and totally unique.
The picture above is of my own miniture creation, "Cheryl" - donned in a leotard because she was inspired by a friend who was a gym fanatic. I too was an aerobics instructor at the time and despite  the realms of physically in-shape and beautiful women in my classes, only ever found one who was satisfied with the way she looked. Most women grumbled about their extra weight and their rolls of fat or their wrinkles. They never seemed to say anything positive about themselves.
The only positive woman I ever found was a paraplegic who only had the use of her arms.  She was an inspiration in her appreciation for her own body and what it could do despite her disability. Although she is dead now, I will never forget her.

This little doll, "Cheryl", reminds me so much of that time.
The doll stands about  10cm tall and is fully jointed.
So why am I telling you all this?
Well, I will never forget the feeling of making this doll.
When the final stitch was put in place, I sat back and looked at it and thought that it was the most beautiful thing in the world.  I had paid such attention to its detail, ensuring that every part was perfectly placed. Each little dimple had been designed to create character and the eyes were painted with a small little white dot which served to bring it to life.
It makes me think about the process of our own creation.
It leads me to wonder about folk who look at themselves, particularly at their own bodies, without admiration for the designer.
I wonder what I would feel like if my own doll were to come to life and made disparaging remarks about how it looked. I would have felt gutted to think that my beautiful handiwork had been rejected by the doll itself. Does not our Maker feel the same way?
So it begs the question...
How then would our own Maker feel if we slandered ourselves?
How would He feel if we didn't appreciate his handiwork or kept saying negative things about ourselves?
Is it not more appropriate to appreciate and celebrate our God-given abilities?
Each one of us has been specifically and uniquely created?
Is it not time to look at ourselves with a measure of positivity?

It's just a thought!
Wishing everyone a really happy Wednesday!
With love

Hi,
I also made a doll years ago, before kids and I still have it somewhere! It was small and cute :) I loved it. I don't think our own maker would mind if we slandered our self, do you mean self mutilation? I know that is bizarre behavior, but some mentally ill people have done that and I know God loves them anyways. I hope that is what you were asking.
Have a great Wednesday!
xxoo
Deborah

Hello, I came to your blog via Judy's Front Porch. This is an amazing thought, and worth pondering more than once! It is something I would like to pass on to my teenage neices if I her disparaging things about their bodies.(they are at that age).Dairymary

First, I ♥ that dolly! I wish I could hold it and rock it and kiss it☺

Yes, all too often we judge ourselves very harshly and ask more of us than we would of any other living being. Women, especially, critique their bodies relentlessly and without ceasing. Thin, tall, short, fat, chubby, thick - whatever - we never see a perfectly created human being - the same human being that our own mother's gazed upon long ago and declared to everyone that we were PERFECT.

The next time we look into the mirror maybe what we should do is look upon ourselves with our mother's eyes - tender eyes - gentle eyes. Eyes filled with love.

I just love the way you follow the thread of a thought down such interesting pathways! I so enjoyed reading about the construction of your beautiful (and singularly unique) Cheryl! She's amazing! I have been a gym instructor too and well know the sort of commentary you write of - body perfection from the nether-worlds of places such as Hollywood have torn at the fringes of young girls' souls for an awfully long time. It's sad indeed that uniqueness is less admired than movie star standards(or the like - such as super-models). A beautiful essay - thanks for posting these good words.
Hugs xoxoxo,
Sammie's Mom

Amazing post, I pondered for a while. Wonderful thoughts, but so hard to do in todays atmosphere of perfect bodies, perfect looks, I wish the message could be spread and accepted!

Well well well, I have never thought of it that way!!!!! Im feeling better about myself already thank you!!!!! Hugs Joey and Kealani and Valerie

It seems the older I get the more I have found acceptance of all the flaws in life, even my own...Of course, I would love to change things about my body, but I am in pretty good shape and don't obsess about myself like I used to when I was younger...I was sick 7 years ago and every day I am grateful to be here; every check up is a little scary, but I truly appreciate the little things like never before...I remember being newly divorced and I was 37 so I had a little issue with the scars for about 2 seconds, but when faced with illness, your body is "just your body and you do what you have to" and you don't worry about the scars so much anymore...There is great freedom in acceptance and appreciation of yourself and others and life in general.

And a very good thought - the message needs to be spread to all women, and most especially to our young girls.

That's a very interesting way of putting it! I never really thought much about what our maker would think when he hears me slandering myself. Doubt that'll change anything for me but it's nice to look at the other perspective too!

What a great thought! God made us as He desired--no mistakes. It's so important to remember that especially in today's world filled with the idea that who we are is wrapped up in how we look.

Woof! Woof! Well said ... my mom ponders on this topic/issue. You sure have a wonderful point of view. Lots of Golden Woofs,

I love this post! You are so right. God made us to be exactly who we are. I am a pretty short girl... but I finally decided that God made me short so why should I want to be anything but who I am. Thanks for sharing. (Cheryl is precious, by the way!)
Maggie

Well said! Thanks for the inspiration, and permission to be ok with who I am!

I remember pining for one of those dolls as a little girl and wishing and hoping that my mom would at least try to sew me one! My grandmother and I sat down one day and drew a gingerbread boy shaped pattern and tried to make one of our own, and it was the homliest thing ever made, but I carried that doll around like treasure. I was so upset with my mom for throwing it away years later. Not because I needed the doll, but because of what it represented to me. It's a similar issue to what you described. It wasn't perfect, or even cute, but it was mine and I loved it! As far as my own body goes, I was much happier with it about two years ago before some major stress hit my life, but I'm working on being happier in my own skin!

Thank you for your thought inspiring message this morning.

Hope you had a good, restful night and that you wake up to a wonderful birthday - whatever it brings.

This was a wonderful post with such great insights. I would love to be able to link to it for my Country Grammy's Walk With God Blog. Would that be alright with you. It has such a touching message that so many of us need to hear.

It is true that God loves us and created us the way we are, and so often with the "lies" that the ad agencies portray, we learn NOT to appreciate the uniqueness that is what God has created. Thank you so much for telling us this story of the beautiful doll that you created and of your insights from doing that work. Linda

I never thought about that myself - what a good thing to think about! sandie