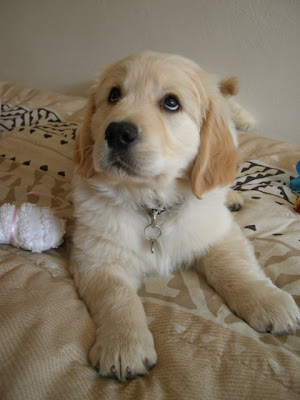 I know that every-furry-buddy is reading dis letta, Aunty Mimi, but MaxMommy and da Tammy-Girl both says I must writes to you...I can't write, but Maxmommy say's she'll type for me.
Aunti Mimi...
you are a very specials lady and I know you are a doggie-nanny, so MaxMommy says that I must say
a big doggie Thankiss you!
MaxMommy showed me da thingys you sent me and she says you want to sees me with dem, so I'm showing yous... 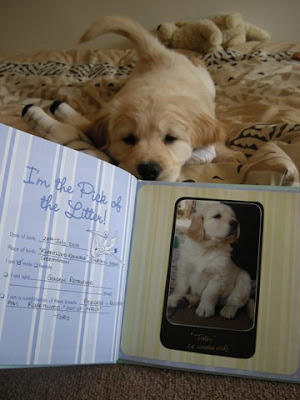 Thankiss you for the Puppy book, Aunti Mimi!
Maxmommy has already pasted my pickichew in it! 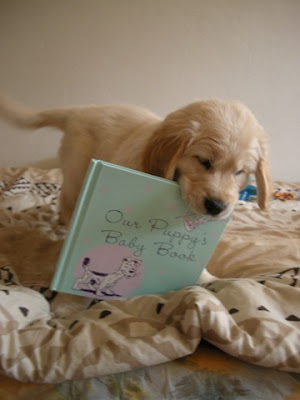 She says I can't playee with it too muches, because it is very specials. 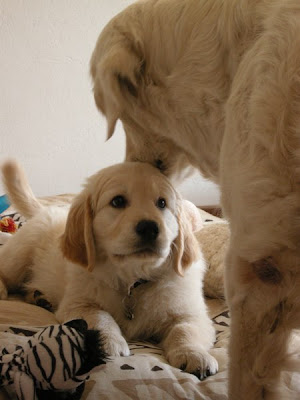 My big sis' the TAMMY-GIRL snoopervises me, so yous don't haves to worries! 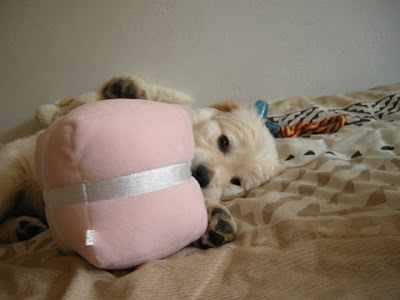 She says that I can playee with her toys instead - the one you sent her!
Thankiss you too for dis, Aunti Mimi!
I luvs it very muches! 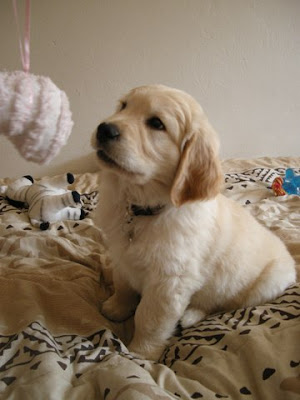 Maxmommy says I mus ask you if I cans play with your heart toy dat you sent her?
I thinks you says yes...
Thankiss you for dat one too! 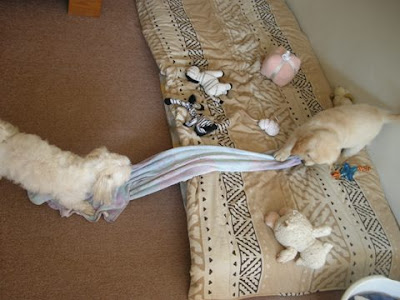 Aunti Mimi...Mr King says I musn't play tugs with them. I can play with da towel instead.
(Mr King says its better to tug far away from me) 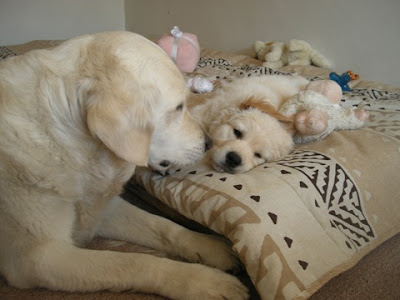 Tammy-Girl, she snoopervises me with e-furry-thing!
I luvs her very much too.
But I really likes my puppy book... 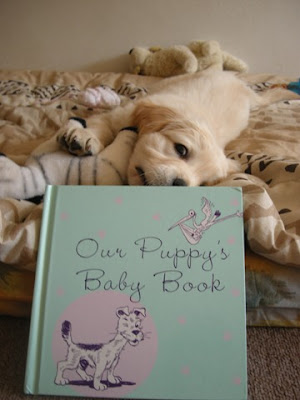 but I also likes playing in da garden... 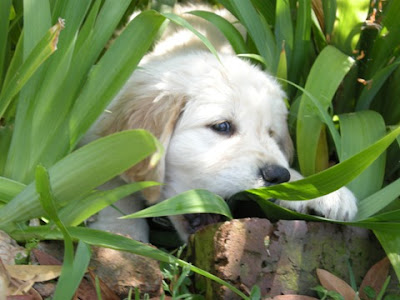 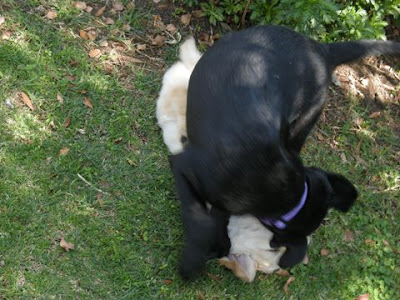 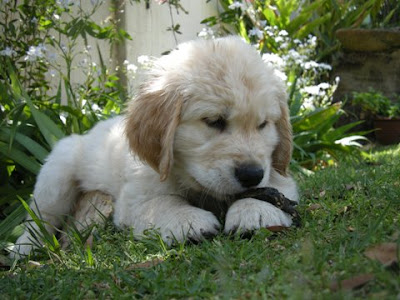 Nots to worry, Aunti Mimi...dat my piece of toy stick there...all's okay.
Anyways, I wants to thankiss you for all dees things. 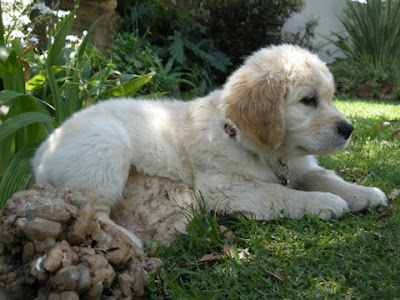 Thankiss you very much Aunti Mimi!
I luvs you lots!
Lotsalicks
TOBY DOGGIE-PUPPY IN SOUTH AFRICA
Shared by Maxmom

Omigoodness, those photos with Tammy just melt me. She has untapped her maternal instinct big time! Toby may just be the world's cutest puppy. I'm sure you agree!

Precious! Looks like everyone is getting along just fine! Tammy is such a good guardian for Toby! Don't tell me King Toffee has let his guard down!

Toby, you are so precious, it just makes my heart sing!!

Now that was a pawesome gift of goodies from your Auntie Mimi - you are a very lucky pup!!! And OMD, can the photos get any more precious?

My sweetness, your Aunti Mimi wishes she could be there with you to snuggle into your chubby tummy and give you kisses and play tug with you and cuddle with you when you nap.

Tell your momma that she is a furry special PURRson to send so much love out into the Universe over here to Michigan. Watching you grow into a big boy is going to be so much fun!

Hugs and kisses and oodles of love,

Toby, you are such a sweetheart!! We love the presents you got from your Auntie Mimi! A puppy book..that is so sweet to have!! Of course we love the toys too! All puppies must have lots of toys! The pictures of you and Tammy make me just melt...they are so sweet!!! Watching you grow up is going to be so exciting! Lots of love and kisses and tummy rubs, Holly and mom

What a lovely letter Toby. And your spelling and grammar are wonderful, considering your age. I am looking forward to seeing you in class on Monday!
Toodle pip!
Bertie.

Your auntie must be very proud!
Your new toys are perfect for you!

We have an "Auntie Overboard" here too. They are they bestest kind. Lady gets spoiled and loved to her hearts content. Toby, you are lucky to have such an awesome Aunti.

That Puppy Book is so cute.
Look at Tammy being the mommy, I knew she'd be great with him. What was a pleasant surprise is to see King Toffee at the other end of the towel playing. GO KING TOFFEE!! He can't resist Toby's cuteness either.

Milo and Alfie are so right.. You are just what your mum needs. Beautiful pictures that make our heart sing. Your presents are brilliant.. You are gorgeous.. Hugs GJ xx

Um, okay, so my mom just melted into a gooey puddle on the floor. Moms are such suckers for cute little fluffy sweet furballs like you, Toby!

You sure do have a sweet Aunt Mimi to send you such beautiful pressies! And it was very much nice and considerate of you to thank her in such a prompt and adorable way. I bet she's got a smile on her face as big as all of Collie-rado! (and that's pretty big!)

What a wonderful Auntie!

The words and the pikhs are just toooooooo pawesome fur words!

Oh boy we are so behind - I can't believe we missed that Toby is home! How awesome is that - and oh my gosh what a cutie! I went through all the posts since he was there - oh, it looks like he is fitting in just perfect, and the picture of him with Tammy just makes me smile! What a cutie he is - it sounds like he is such a happy little guy, and we are so glad he is with you in his forever home now!

This is one of the best things about having a new arrival, the great welcoming gifts that arrive to make the new addition feel that much more welcomed!! I really love Tammy with Toby and it's great to see that even the King has found a soft spot for the new prince! :-)))

What a cool idea! I've seen baby books, of course, but never a puppy book! It's going to be fun filling that up.

I'm so glad to see King Toffee playing with Toby. Hopefully in time he'll let his guard down more and maybe they'll even be friends.

Oh how sweet of Auntie Mimi to send such luscious toys and book! I must say too that those photos of Toby and Tammy are just so sweet! And the first page of the book your Mom helped you make are wonderful! Even the towel tug game with Mr. Toffee is just wonderful! You are so welcomed, Toby - and we send you hugs and love too!
xoxoxoxoxoxoxoxo,
Sammie and Avalon

Doesn't Aunt Mimi have the most giving heart?
I am not one bit surprised that all those gifts came to you sweet Toby.
That puppy book and all the gifts.... oh yes, Toby needs toys!
I love all the sweet photos of you Toby. Your so cute with Tammy and King Toffee.
What a doll you are...
Such a sweet letter you wrote to Aunt Mimi
love
tweedles

Oh Toby!!!! How cute you are and so lucky to have such a special auntie!!!! And it looks like Tammy is going to be looking out after you!!!! Yay!!! We love you!!! Hugs Joey and Kealani

I love the photos of Toby with Tammy, they are just magical together!...Beautiful babies, lovely gifts...Hope you guys have a fun Friday; I have a feeling Toby is making everyday a lot of fun for you all!

I could watch that video over and over and over again ... what a sweet puppy dog...and that letter, so adorable the way it's written...I can just see him saying it that way! Too cute!

What wonderful gifts from Auntie Mimi! Those pictures of you with Tammy are just too precious, Toby!

You are the cutest, cutest, cutest little puppy! You are very lucky too, with your mom, Tammy, and the King all watching out for you.

I saw a yellow lab puppy yesterday. Oh my... someday one will join us. Just not quite yet. I'll watch you grow up instead!

♥Toby, I'm just dropping by to give you a virtual cuddle and kiss. Your aunti is hoping that you are having a wonderful day♥

Toby!! This is what comes to mind... Ahhhhhhhhh!! Sweet gifts, sweet pals, sweet Auntie Mimi, sweet YOU my friend!

What a lovely thank you letter to your Auntie Mimi.

Well hello Toby! It is nice to meet you. We have missed so very much in the last few weeks.
We are now caught up on your adventures and have enjoyed getting to know you very much!
Watching Tammy-girl take care of you is so wonderful. It seems here heart needed a filling as much as Maxmom's did.
We look forward to reading about your adventures. You have a whole big world to explore and loving beings to go with you.
Our hearts feel a little fuller as well!