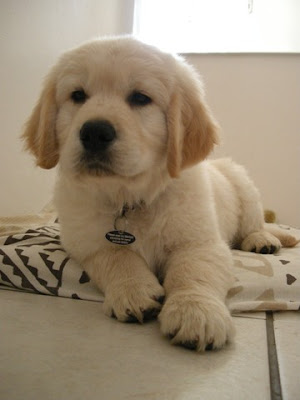 Hello there to all our friends across the globe...
Our new 8 and a half week old puppy ...
TOBY
has turned into a cute, little, Toby tyrant!
Unfortunately he won't sit still for photographs, and I have to snap away in a split second, so please forgive the 'out-of-focus' pictures today.
Our resident weaver bird is far more co-operative!... 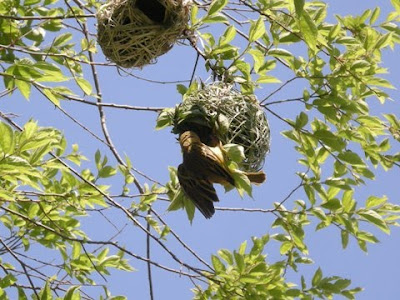 As for Toby he's already stolen our feather duster on numerous occasions as well as various cleaning cloths around the house. He romps in my flowers and - of course - stops to chew them too. 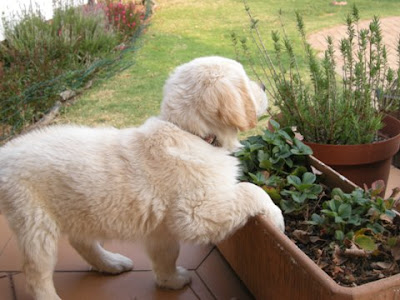 It is extremely windy today, so he's extra playful and like the wind - he is really fast! Thankfully he eventually collapses to sleep with equal purpose...but that's after he's stolen my slippers or found something else which is prohibited... 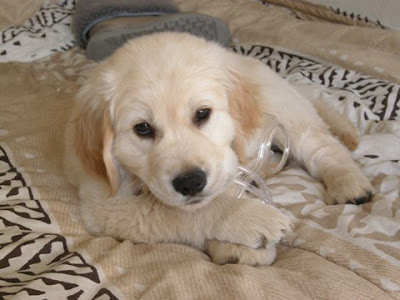 Tammy-Girl still keeps a constant eye on things and takes everything in her stride... 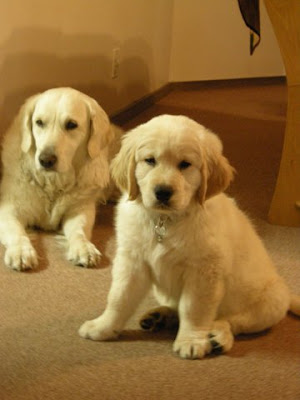 Toby slept right through th night last night...probably because he gets so much exercise during the day!
Asta came for their 'puppy-play-session' yesterday and she is even more of a hooligan than him...obviously because she's older....but they had enormous fun!  Toby spent most of the time on his back, but then gave a sprightly performance of what we may expect in a few weeks time when he grows up a little ...he can show some force too....
"Count your days, Asta, LOL!" 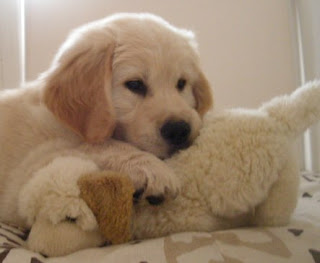 His session with Asta must have sapped his energy because he had only enough left to walk one block with Tammy yesterday afternoon....I had to carry him for the rest. 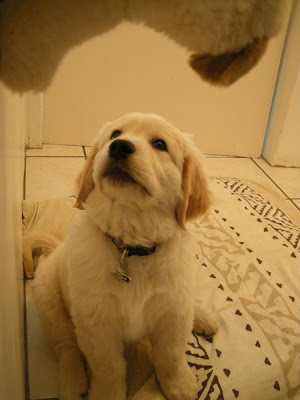 He loves the sound of ripping out grass - little tufts - which he then brings into the house. He has little sweet traits - for example he's scared of the wind - and then he comes running to me for protection.  He's also nervous of loud, barking dogs, so he lets King-Toffee do the talking over the neighbour's wall. 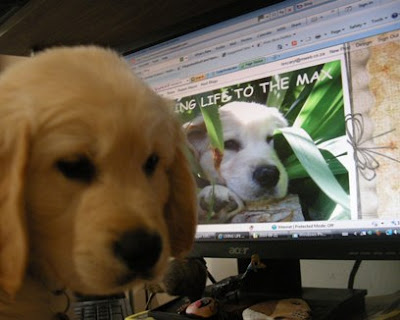 As for the blog, he's still practicing! 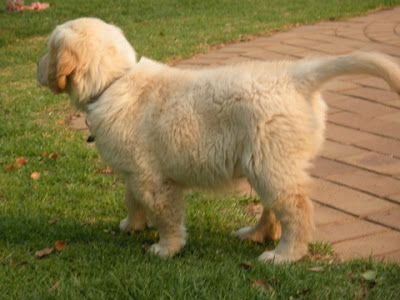 There are very few occasions when he is standing still for me to get a good photo. 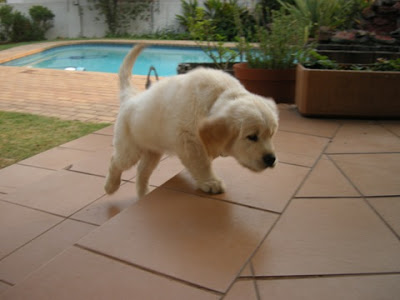 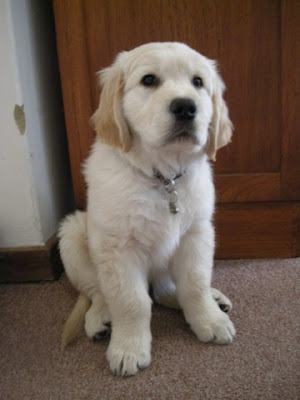 He is an absolute delight though and I can't resist an early morning cuddle in bed....mmmm...maybe not a good idea if I am to secure his future behaviour...but I can't resist! I really can't! 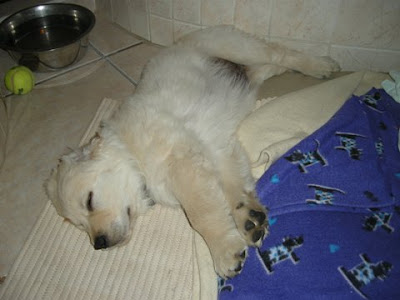 Who could say "No" to an angelic face like this?
...but....he ate up the King's food this morning!
The joys of puppyhood!
(To his breeder: Zena....I love him to bits!...he is the best pup in the world!...thank you!)
Sending lotsaluv to you all!

LOL, indeed, how could you resist this teddy bear of a dog?!

honestly, he is the cutest!!!
xoxo

He is too cute! He looks like an excellent snuggler!

Hmm, pulling out grass - sounds like my Neeli when she was a puppy! Must be a Golden trait!

He's gorgeous - enjoy these days (someday you'll forgot how tired you were and how mischievous Toby was)!

OMG he is just soooo cute, I love the pictures of him with Tammy-girl - so adorable.

Sounds like there is one very lucky and happy puppy in your house. It is a great joy to know that Toffee is taking a full part in the new order of things.

Ahhh, the joys of puppyhood - good thing there are mor good ones than terrible ones. And they all grow up too soon. Enjoy.

These are the sweet days. Enjoy them while they last.

You a tyrant? I don't think so. You are too cute and we love you!

Oh My Goodness Toby!
I just want to squeeze the daylights out of you...do you say that is SA?
Sending lots of hugs and bellyrubs from GA...
C, have you heard from LM?
xoxoxo
~K

Toby is just such a cutie! And oh I am not surprised it is tough to get a picture right now - he is at that age where he has a lot of energy that he needs to get out! At least he is little so he gets tired out and you can get some cute sleepy pics - and the action ones are so good too - a little blur just shows how much energy he has!

Toby
I'll let you into a little secret. I too am scared of strong winds.
Oh, and I promise that I will no longer call you Tubby when you attend my classes!
Toodle pip!
Bertie.

I remember the joys of puppyhood!!! Puppies can be trying to say the least but very rewarding!! I just love Toby so much!! I want to hold him and kiss him and hug him. He is totally adorable!! Give that little guy lots of hugs for me please and some extra kisses!! lots of love, Debbie and Holly

Oh what is better than a mischivious puppy. We can't help giggling every time we read your blight Toby. BOL
Benny & Lily
Pee S Bet you are keeping momma and the king busy

Um, thank you for getting a puppy so the rest of us in cyberspace can be like the grandparents... we get our puppy fix and give him back to you for all the "other" not so cute stuff! ha-ha

with a title like Toby Tyrant, i couldn't resist! what a cutie pie.

Toby is adorable and so funny. Of love hearing your puppy tales. Have I told you that I love your picture at the top of your blog? I really do. It's so great that Asta comes over so they can wear each other out. Tammy is, of course, a love and we all knew she would be remarkable with her new charge.
OH,,what a good picture of the weaver bird. Those nests are amazing. God gave that bird incredible creative talent.
Love from all of us in the holler.

Not even us cats can resist that cute face!

Toby is just one lucky pup!

We are lucky to see him grow up, but not chew our slippers! BOL

Oh Toby you get more adorable by the day.. No wonder your mum wants to cuddle you.. Gorgeous.. Hugs GJ xx

Oh Toby, Murray got such a laugh reading about all the things you're getting up too and the fun you're having around your house!

Shiver was the first puppy I've ever had. All the other dogs I've had have been at least a year old before I got them. And ya know, I felt like he just chewed and chewed and chewed on everything single thing in sight except for his toys, no matter how much I pushed them on him. I really didn't feel a lot of affection for him until he was a year or so old and calmed down some. I'm glad you don't feel that way about Toby. I truly do love Shiver now and would never willingly give him up but those days of puppyhood really drove me crazy. I wish I could go back now and have more appreciation for them.

I can understand the being scared of the wind thing. On Monday there were very strong winds gusts where I live (gusts up to 150km/h) and I had trouble standing up. I was almost blown over several times,and mum was laughing at me as my fur kept blowing backwards, and the wind was blowing my tail around - she wished she had taken photos to show you! Then the strong winds made noises in some of the trees, and I got quite nervous just like you do, but the storm is passing, the winds are getting less, and going for my daily walks is still fun even if I do keep checking over my shoulder at the moment.

I don't think I'd evFUR be able to take my eyes off him!

i don't think i could resist toby either! he is beyond adorable!!

What a cutie patootie! If he wasn't acting like a little hooligan I'd have to say that there was something wrong with him. He sounds perfectly fine to me - of course, I don't have to clean up after him or chase him around all day with my camera!

Take your naps when you can, Caryl, or by the time this little man grows up you are going to be totally worn to a frazzle☺

BTW is he ever GORGEOUS! I adore his chubby tummy and the way he sits like a little Buddha!

Humph! Good thing he is cute! What a pest. Poor Tammy!